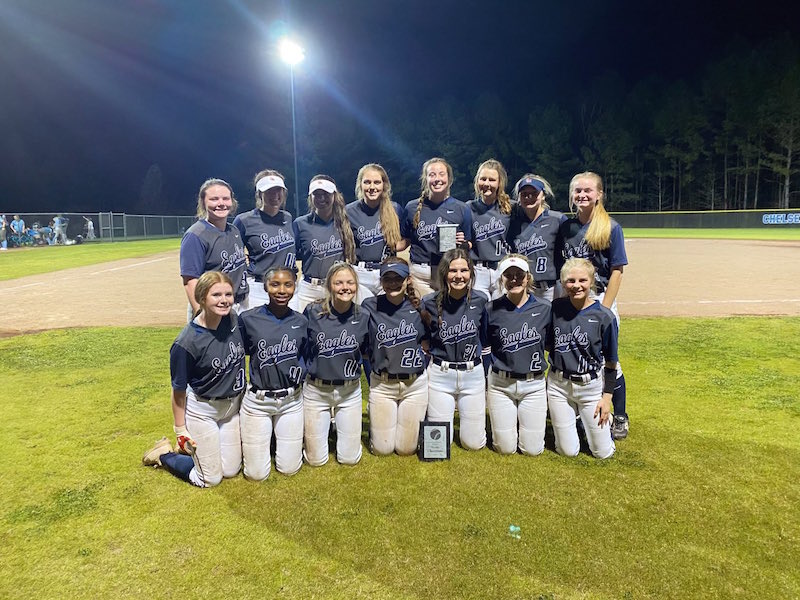 CHELSEA – After losing to host Chelsea in the second game of the Hornet Blowout tournament on Friday, March 12, the Oak Mountain Eagles responded by winning two games in a row on Saturday to claim the tournament championship.

It capped off a 3-1 tournament for the Eagles, who beat Calera 5-2 in the opening game and then Sumiton Christian 5-4 and Calera again 10-1 on Saturday.

In the first matchup against Calera, Oak Mountain was able to score all five of its runs in the first two innings of the game, which was more than enough for Lacy Marty in the circle.

The Eagles got back-to-back doubles from Dawn Autry and Elizabeth Zaleski in the bottom of the first to quickly tie the game at 1-1. That was followed by an RBI single from Marty to make it 2-1.

Oak Mountain then put together a three-run second inning thanks to a two-RBI single from Sarah Katona to make it 4-1 before Anna Fleming made it 5-1 with a steal of home later in the inning.

Marty gave up one more run, but was flawless for the most part. She allowed four hits and two runs while striking out seven to pick up the win.

Coming back the next day after the 11-3 loss to Chelsea, Oak Mountain was looking to bounce back and the Eagles did just that in a tight win against Sumiton Christian.

Following that, the Eagles were forced to hold on after Sumiton Christian came back to score three combined runs between the fourth and fifth to pull within one run.

She struck out eight in the win and allowed six hits and four runs.

Grace Hummel led the way at the plate with a 2-for-2 performance featuring two RBIs, while Riley Sullivan added two RBIs with one hit. Marty, Autry and Emily Hart each had one hit.

Oak Mountain then followed that with a dominant final game against Calera thanks to 10 runs offensively and another strong showing from Marty in the circle to close out the tournament.

The Eagles scored two in the first, seven in the second and one in the third to total their 10 runs and put the game to rest.

Sullivan was a big reason why with a 2-for-3 performance featuring one RBI, while Zaleski and Marty each added one hit and two RBIs. Katona and Hart each had one hit and one RBI.

Marty finished a strong weekend with a complete-game effort, striking out seven and giving up one run and six hits. She went on to earn MVP of the tournament.