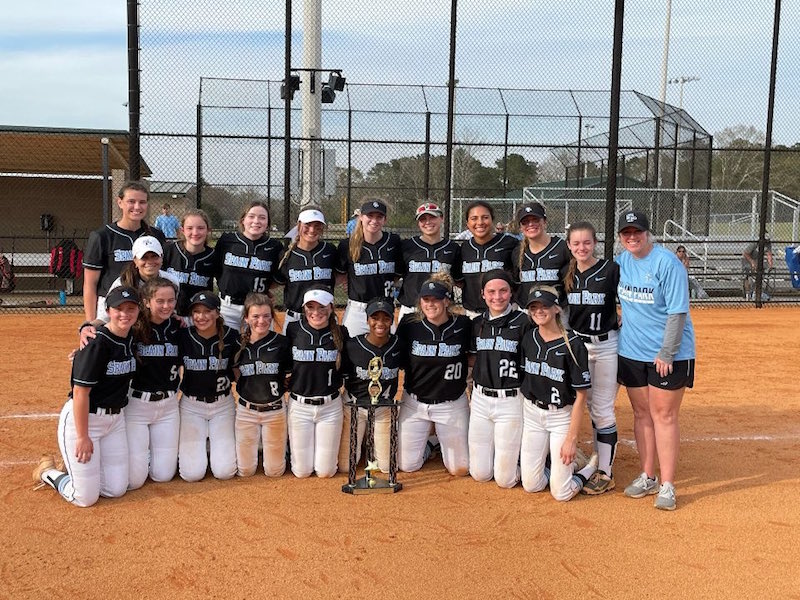 DOTHAN – Following a gut-wrenching 2-1 area loss to Hewitt-Trussville on Thursday, March 11, to even their area record at 1-1, the Spain Park Jaguars bounced back and took out their frustrations in a perfect showing at the Dothan softball tournament March 12-13.

The Jags won five games in a row to take home the tournament’s championship and won four of those by at least four runs.

The opening game against Rehobeth was the tightest of the tournament for Spain Park, but the Jaguars were able to squeak out a one-run win thanks to a walk-off two-RBI single from Lydia Coleman for a 7-6 victory.

In the early going, it looked like the Jags were going to coast to a win after scoring three runs in the first and two more in the second to take a 5-0 lead through the first two innings.

Rehobeth, however, bounced back with a four-run top of the third to draw within one run before then scoring two more in the top of the fourth to take a 6-5 lead.

The Jaguars then entered the bottom half of the fourth trailing for the first time in the game.

But a lead-off single from pinch hitter Emma Jolley provided a spark. That was followed by a grounder from Lucy Spisto that the third baseman struggled to field, which not only led to her reaching base safely but eventually moving both into scoring position.

That paved the way for Coleman to win the game with her two-RBI single.

She went on to lead the Jags with a 3-for-3 performance featuring those two RBIs as well as two runs scored.

Annabelle Wdira and Katie Flannery each added one hit with two RBIs, while Maggie Daniel was 1-for-2 with one RBI. Ella Reed got the win in the circle after allowing five hits and six runs with six strikeouts.

Spain Park got off to an even better start in the next game. After giving up two runs in the top of the first, the Jaguars scored eight in the bottom half to take control. Both teams went on to score one more run the rest of the way to give the Jags a 9-3 win.

Coleman, Widra and Morgan Jolley led the way with 2-for-2 performances and a combined five RBIs. Daniel and Chloe Brittain each went 1-for-2 with two RBIs.

Katherine Brown and Reagan Stewart combined to allow three hits and three runs with three strikeouts in the circle.

The next day, Spain Park started with a 4-0 win against Slocomb thanks to a stellar showing from Ella Reed in the circle. She allowed just one hit and no hits in a complete-game win featuring six stakeouts.

Taking on tournament host Dothan shortly after, the Jags were locked in a 2-2 battle through the first three innings.

But after Dothan went scoreless through the top of the fourth, Spain Park was able to score five runs in the bottom of the fourth to cement a 7-2 victory.

The Jags got a two-RBI double from Flannery, a two-RBI triple from Daniel and an RBI single from Brittain to complete the five-run win.

Daniel went 3-for-3 in a strong performance featuring four RBIs, while Coleman had multiple hits yet again with a 2-for-3 performance. Flannery added one hit and two RBIs, while Brittain was 1-for-3 with an RBI.

Widra got the win after striking out nine batters and allowing two hits in the circle.

In the championship game against Opp, Spain Park scored 10 runs in the first three innings to help overcome a four-run fourth inning from Opp to grab a 10-5 win and claim the tournament title.

The Jags were led by Coleman, Emma Hawkins and Widra with two hits each, while Coleman and Hawkins each had two RBIs in the win and Widra one RBI. Daniel also added an RBI and a hit to close out the tournament.

Reed finished off her weekend with a win in the circle after striking out four and allowing five hits and five runs to score.