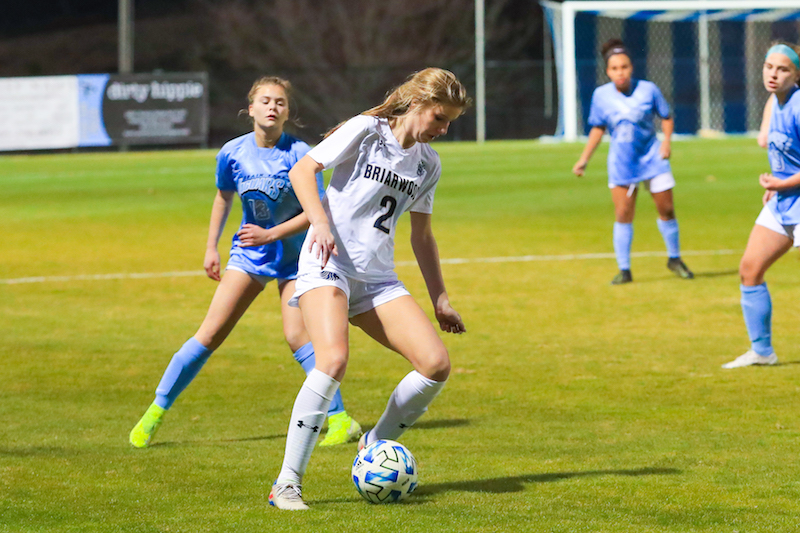 The Briarwood boys and girls soccer teams picked up crucial area wins against top-10 opponent Chelsea on Friday, March 12. (For the Reporter/Dawn Harrison)

NORTH SHELBY – The Briarwood boys and girls soccer teams both showed they could compete for a playoff spot this year with rivalry wins against the Chelsea Hornets on Friday, March 12.

In two top-10 battles, the Lions got wins from the girls in a thrilling PK upset victory and the boys in a 2-0 shutout, as both got area wins in the process.

The girls, who looked to be struggling early in the season with a 3-5 record through their first eight games, have since found a rhythm and look to be a legitimate threat for the postseason now after upsetting the Hornets.

Not only did the Lions pull off a 2-1 victory in PKs after battling to a 1-1 tie through two overtimes, but they took down a Chelsea team who entered the season as the No. 1 team in Class 6A.

With the win, Briarwood won its fourth game in a row and improved to 2-1 in area play. With both Chelsea and the Lions battling in a difficult area featuring No. 1 Homewood as well as No. 9 Mountain Brook, each game is key.

The Lions have now outscored their last four opponents by a combined 16-5, while all losses this year have come to ranked teams.

Briarwood’s boys were in a different situation.

Despite a 6-0 start to the season, in which they Lions gave up just two combined goals with four shutouts, they lost back-to-back games to No. 1 Mountain Brook and No. 2 Homewood by a combined 8-1 to kick off area play.

With the top two teams in the state residing in their area, the Lions couldn’t afford another loss to Chelsea if they wanted a chance at the postseason.

But the Hornets were no easy target either with a ranking of No. 6 in the state.

They were also looking to bounce back with two area losses to the Spartans and Patriots.

Competing in arguably the most difficult area in the state, Briarwood was able to get the upper hand early with a goal in the first 10 minutes to take a 1-0 advantage.

Chelsea was forced to battle from behind and pressed hard for the remainder of the first half, getting several good looks, but the Hornets couldn’t find the equalizer.

That remained the story for much of the game; then, the Lions were able to put through an insurance goal in the second half to take a 2-0 lead late. That became the difference in a 2-0 victory for Briarwood.

The Lions improved to 7-2 with the win and 1-2 in area play with one matchup left against each area opponent.