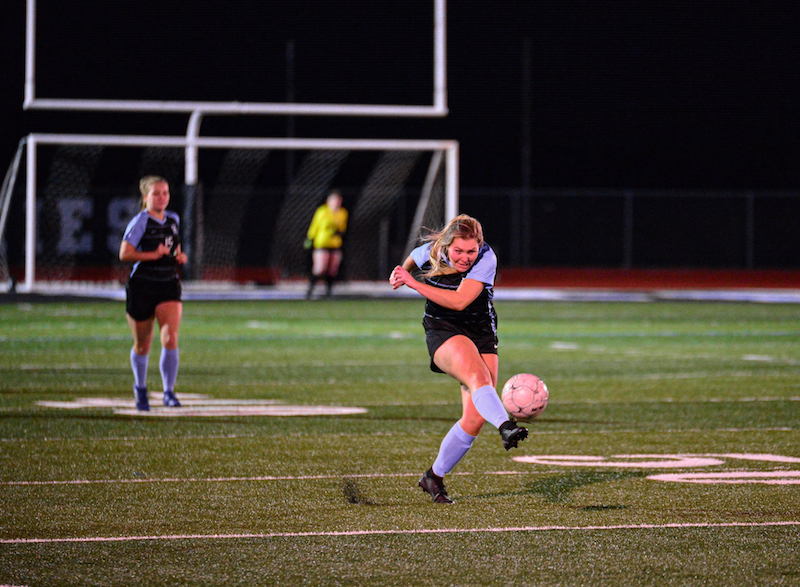 Helena’s girls and Calera’s boys picked up area wins on Thursday, March 11, with the girls taking down the Eagles 5-0 and the boys taking down the Huskies 3-2 in penalty kicks. (For the Reporter/Jeremy Raines)

CALERA – Two county foes split their area matchups on Thursday, March 11, when the Helena Huskies and Calera Eagles saw their boys and girls soccer teams square off against one another.

With each looking to bring home an area win, both schools had something to celebrate as the Calera boys grabbed a tight 3-2 win and the Helena girls picked up a 5-0 shutout victory.

The matchup between the two boys teams was the one that went down to the wire and couldn’t be settled in regulation or overtime, which led to penalty kicks.

Calera was able to edge out the Huskies in PKs to pick up to pick up a 3-2 victory and improve to 2-1 in area play.

It didn’t come without a challenge, however.

The Eagles trailed 2-1 in the final seconds of the game, but a battle in the box ended with a ball finding its way into the back of the net for an equalizer just before time expired to force overtime.

After two overtimes came and went scoreless, Calera was able to outlast Helena in PKs to pick up the thrilling comeback victory.

The only losses for the boys this season have now come against 7A top-10 team Thompson 4-0 and area foe Pelham 2-0.

The Eagles have now won three of four by a combined 8-2, including area wins against Chilton County and now Helena. The wins against the Tigers and Huskies have Calera in second place in the area heading into the second half of area play.

In the girls game, it was Helena who continued a strong stretch of play with its third win in the last four games.

The Huskies picked up a 5-0 win to improve to 2-0 in area play and 7-3-2 overall this season. In the last four games, the only outcome not a win was a 3-3 tie with Northridge.

The Huskies got one goal in the first half and four more in the second half to complete the win. Riley Hulsey led the way with two goals, while Miah Rosener, Bailee Washington and Piper Stovall scored one goal each.

Washington, Ashlyn Beery and Hulsey each had one assist as well.