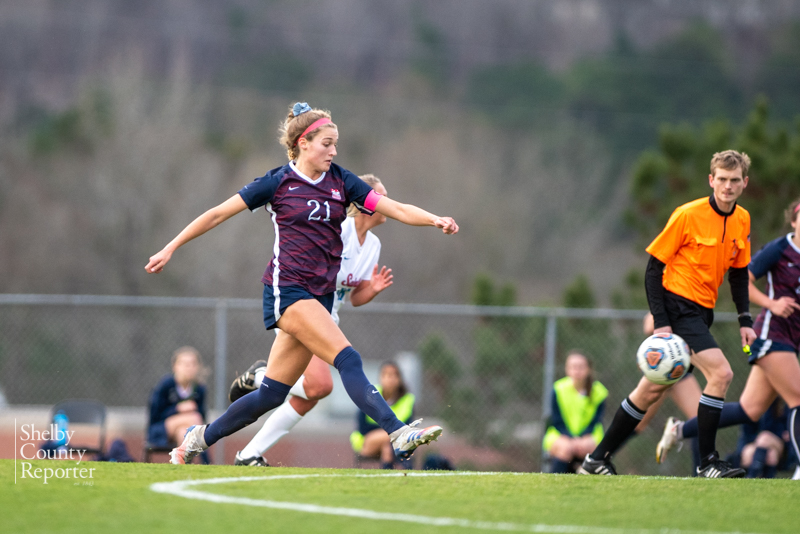 The Oak Mountain girls soccer team improved to 3-0 in area play with a 4-2 victory against No. 12 Hoover on Friday, March 12. (File)

HOOVER – In a continued difficult schedule, the Oak Mountain girls soccer team picked up one of their biggest wins of the season on Friday, March 12, when the Eagles took down a ranked area foe.

Coming off a 2-0 loss to 7A No. 5 James Clemens, marking just their second loss of the season, the Eagles not only needed to bounce back, but needed to do so in order to remain firmly atop the area standings.

Taking on No. 12 Hoover, that’s exactly what they did.

Oak Mountain overcame an early 1-0 deficit by outscoring the Buccaneers 4-1 the rest of the way to pick up a 4-2 win. With the victory, the Eagles improved to 3-0 in area play with wins now against each opposing team in the area.

They beat Thompson 3-0, Tuscaloosa County 10-0 and now Hoover 4-2. That puts Oak Mountain as the only unbeaten team in the area and the favorite for the top spot out of the area going into the second half of the season.

Hoover took the lead in the early seconds of the game to go up 1-0, but Oak Mountain responded quickly within the first eight minutes to even the score.

The 1-1 tie became the halftime score, as neither team found much offensively the rest of the half after that early success.

The Eagles, however, started to force the Hoover goalkeeper to make saves late in the first half, and that pressure carried into the second half.

Oak Mountain’s resiliency with the ball paid off early in the second half when the Eagles were able to score in the first 1:03 of the period. They continued to press and take shots, which led to another goal two minutes later for a 3-1 lead.

The Eagles then closed out their scoring on a cross and header to go up 4-1 10 minutes later.

Hoover added a goal a few minutes later off a deflection to cut the deficit to 4-2, but that’s as close as the Bucs could get the rest of the way.

Oak Mountain has now outscored all three area opponents by a combined 17-2, while the Eagles have held every opponent this season to two goals or less with nine shutouts.

Their only other loss came in a 1-0 battle with 6A No. 1 Homewood, as the Eagles now sit at 12-2 overall this season.