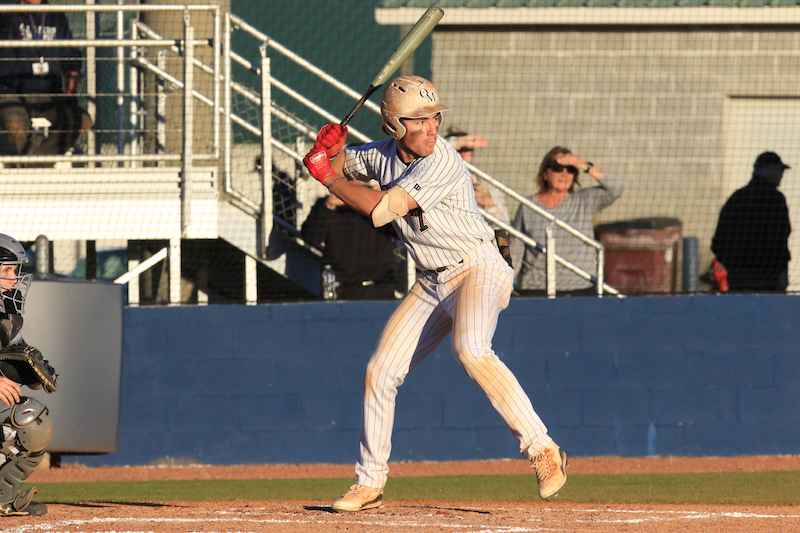 The Oak Mountain Eagles picked up a 6-5 win against Prattville on Friday, March 12, during a doubleheader with the Lions thanks to a final-inning comeback. (For the Reporter/Dawn Harrison)

PRATTVILLE – After losing to Prattville 5-0 in a game they only picked up one hit in, the Oak Mountain Eagles bounced back to take down the Lions 7-6 in the second game behind a two-run final inning.

Trailing 6-5 after two three-run innings earlier in the game from Prattville, the Eagles stepped to the plate in the top of the seventh looking for a spark. They got just that thanks to a leadoff double from Maddox Macrory.

Following a groundout, Carter Kimbrell walked to put runners on the corners with one out. Then, Stephen Moraski stepped to the plate and laid down the perfect sac bunt. The only play was at first, which allowed Macrory to cross the plate and tie the game.

With Kimbrell now in scoring position, Jake Derecki stepped to the plate and made the difference. He hit a pop fly to center field that fell for a single to drive home Kimbrell for what became the game-winning run in a 7-6 victory.

Davis Gillespie also helped on the mound with a dominant final two innings. He gave the Eagles a chance by striking out the side in the bottom of the sixth, and then with the lead in the bottom of the seventh, he was able to strikeout two of the three batters he faced and get the Lions to go down in order for the win.

That, however, was followed by another three-run inning from the Lions in the bottom of the fifth to give them the lead right back at 6-5.

But Oak Mountain’s bats finished strong with runs in four of the final five innings, including the two runs in the top of the seventh.

Macrory, Moraski and Chapman Wallock led the way for the Eagles thanks to two hits and one RBI apiece. Beyond that, Gillespie, Mitchell Pierce and Derecki each added one hit and one RBI.

Matthew Heiberger got the start on the mound and pitched the first three innings. He allowed three total runs and one earned run while walking four, but he also had eight strikeouts, meaning all but one of the nine outs recorded with him on the mound came via strikeout.

Macrory continued that trend with four strikeouts in 1 1/3 innings pitched despite allowing three hits and three runs. Gillespie then closed out the game without giving up a hit, run or walk and striking out five. As a team, the Eagles totaled 17 strikeouts on the mound in the win.