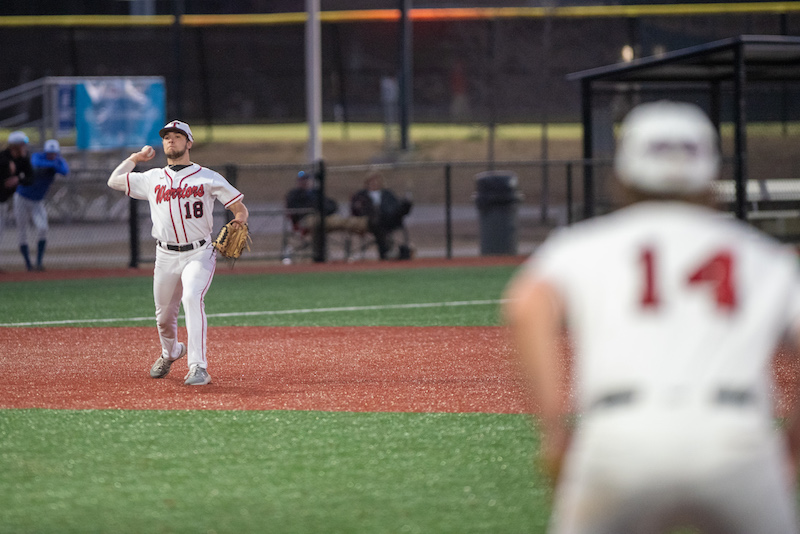 Thompson was able to take down Vestavia Hills 5-4 in the first of two games on Friday, March 12, thanks to a walk-off three-run home run in the bottom of the eighth. (Reporter photo/Keith McCoy)

ALABASTER – Taking on one of the state’s best teams, the Thompson Warriors pulled off some late-game heroics against Vestavia Hills on Friday, March 12 to pick up a split in a doubleheader.

While the Warriors lost the second game of the doubleheader 7-1, they showed resiliency in the first game to pull off walk-off victory.

Thompson fell behind 1-0 in the top of the second inning, but thanks to solid pitching from starter Trey Puckett, the Warriors hung around.

Then, in the bottom of the sixth, they struck. Following back-to-back singles from Logan Braunschweig and Cade Watts, both were able to cross the plate to give Thompson the lead. The Braunschweig scored on an error from the pitcher during Puckett’s at bat, before Watts scored on a ground out to shortstop.

Vestavia came back to tie the game in the top of the seventh with its first run since the second inning, which forced extras.

Then, in the top of the eighth, it looked like the Rebels were going to complete a comeback with two runs to break the tie and take a 4-2 advantage.

Vestavia needed three outs to preserve the win, but the Rebels didn’t get one.

Thompson came to the plate on a mission in the bottom of the eighth. Watts was hit by a pitch to lead off the inning before Puckett singled to left field to put two aboard with no outs.

Then stepped to the plate Ben Pearman.

In a 3-1 hitter’s count, Pearman took the fifth pitch of the at bat and with one swing of the bat ended the game with a three-run walk-off home run to left field to give Thompson a 5-4 victory.

Pearman led the way with that one hit and three RBIs, while Watts and Puckett both finished with two hits. Puckett added one RBI, while Tristan Woody and Braunschweig each had one hit.

On the mound, Puckett pitched seven innings and allowed five hits and two runs, one of which was earned. He also struck out one.

In the second game, Thompson scored one run in the bottom of the first, but the Warriors went on to leave 10 runners on base in a 7-1 loss.

Braunschweig led the way with a 2-for-3 performance. Beyond that, Puckett and Pearman each had one hit.