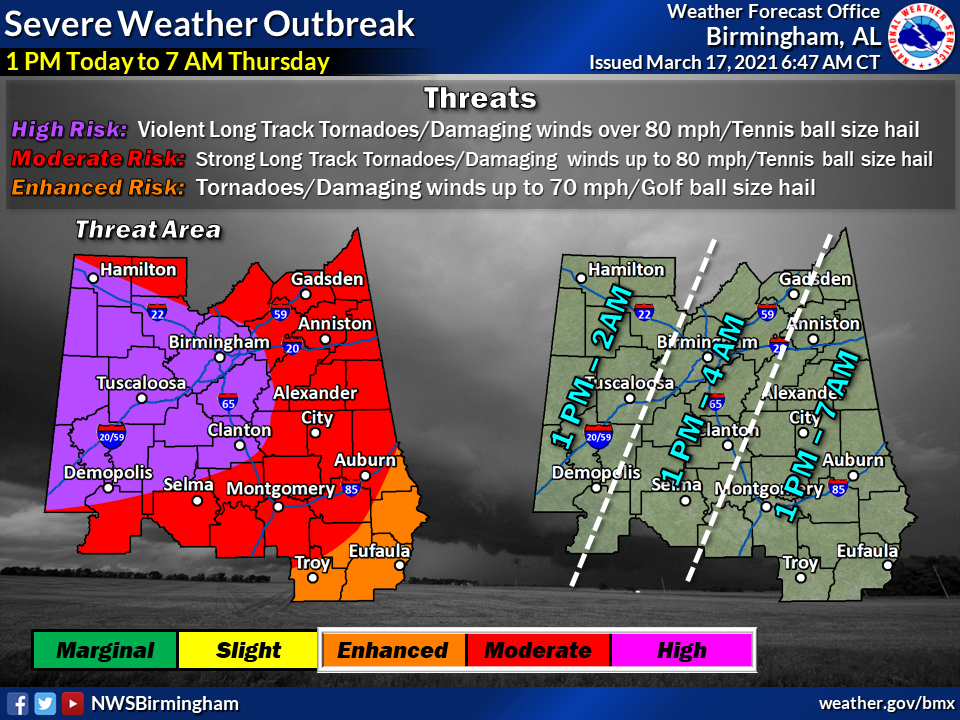 Shelby County has now been included in the high risk category for severe weather following the latest update from the National Weather Service. (File)

With their latest update, the National Weather Service in Birmingham has upgraded Shelby County to be included in the high risk category for severe weather today.

The high risk line has moved eastward overnight and was updated to include Shelby County around 8 a.m. on Wednesday morning. That puts the county in a category five for severe weather on a scale of five and brings the chance of strong tornadoes, damaging wind and hail to the area.

The cause for the storms will come from a stalled warm front draped across central Alabama early Wednesday, creating an unstable atmosphere prime for severe weather and tornadoes, and being trailed by a cold front to the East, which could bring straight line winds and more tornadoes.

“What we’re expecting to happen is that warm front to move North throughout the day, and that’s going to allow for unstable air to build across central Alabama,” said meteorologist Gerald Satterwhite with the National Weather Service in Birmingham. “At the same time, there is going to be an upper-level storm system from the southern plains, so we’re going to have an overlap of unstable air and increased wind shear.”

“The general message is everybody in Alabama is under a threat of severe weather,” Satterwhite said. “We’re going to be focused on the risk for tornadoes. Some of those could be strong and long tracked based on some of the parameters.”

There could also be several waves of severe weather according to the NWS with an initial wave in the morning and afternoon. That will depend on how the two fronts move throughout the day on Wednesday.

The main threat, however, will come later that evening and into the early-morning hours of Thursday from 1 p.m.-4 a.m.

When it comes to tornado sheltering safety, the NWS says to make sure you are not in a mobile home or a vehicle and to avoid large open rooms. The best place to be is in an interior room of a well-constructed home or building on the lowest possible floor with a basement being the preferred spot if possible.

You are also encouraged to have a way of getting weather alerts either from a weather radio or your cellphone. The National Weather Service does ask that you also have an emergency kit and that you be prepared with a plan in case a tornado strikes.

A list of open storm shelters in Shelby County can be found here.