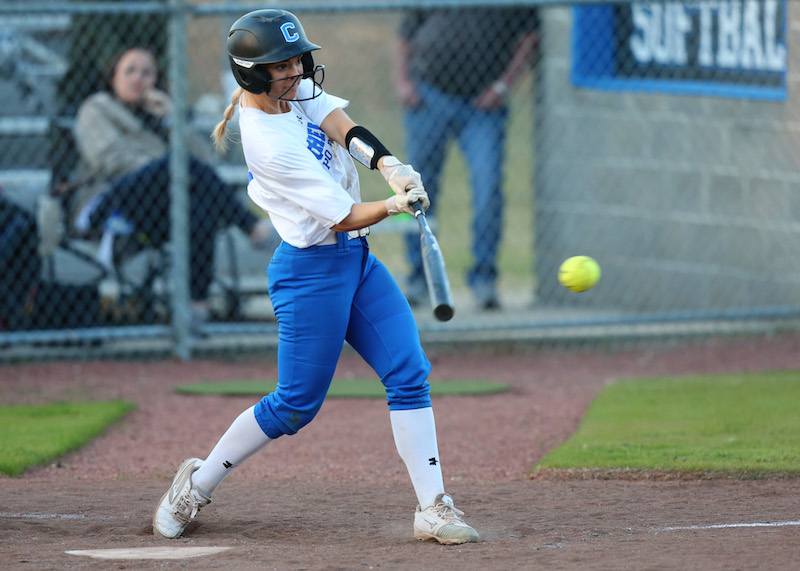 Chelsea's softball team got two home runs each from Tyler Erwin and Olivia Bergert to pick up a 13-run area win against Homewood. (For the Reporter/Cari Dean)

HOMEWOOD – Chelsea’s softball team continued a strong stretch on Thursday, March 18, when the Hornets were able to put together one of their most dominant wins of the season.

Taking on area foe Homewood, Chelsea scored two or more runs in all but one of the seven innings to pull away for a lopsided 19-3 area win against the Patriots.

The Hornets outhit Homewood 14-6 in the win and committed four less errors to pick up the easy win.

Homewood scored runs in the first and second innings, but it was no match for Chelsea’s offense.

The Hornets, however, trailed at the end of two innings with Homewood holding a 3-2 lead.

That changed in the top of the third when Olivia Bergert blasted a home run to left field to give Chelsea the lead with one swing of the bat, and it never changed hands again.

The real difference maker came in the top of the fourth thanks to a six-run explosion. It started with back-to-back doubles, the second of which from Natalie Romager drove home one run.

An error allowed another run to score, while an RBI single from Tyler Erwin made it 7-3.

Then, Bergert came back to the plate with two outs and blasted another bomb over the left-field fence, this time a three-run shot to give the Hornets a 10-3 advantage.

Erwin was also big for Chelsea as she hit two home runs the rest of the way to drive home a total of six runs in the game.

Both finished with two home runs, while Erwin went 4-for-5 with six RBIs and five runs scored and Bergert went 2-for-4 with five RBIs and two runs scored.