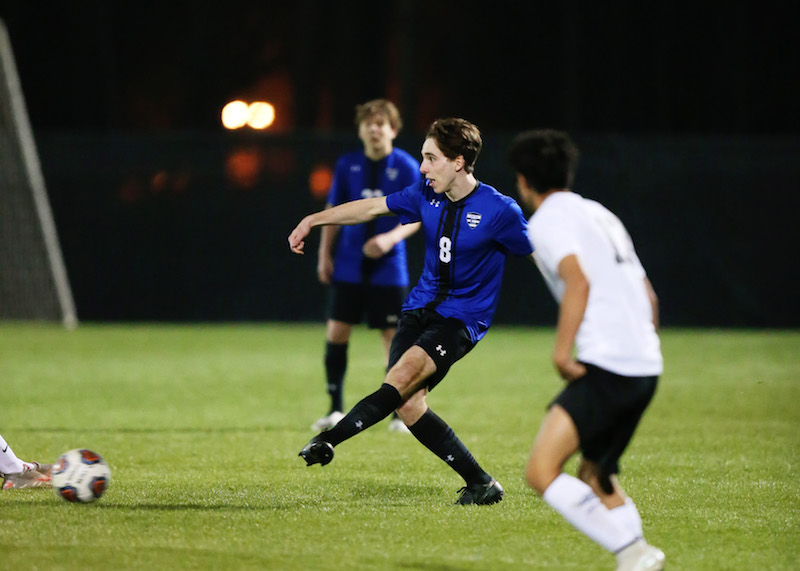 Chelsea's Andrew Teixeira had a hat trick to help head coach Lee Miller pick up his 200th career win on Thursday, March 18. (For the Reporter/Cari Dean)

CHELSEA – Since 2008, Lee Miller has been racking up wins at Chelsea High School and on Thursday, March 18, the head boys soccer coach picked up a milestone victory.

He picked up his 168th win with the Hornets, but more importantly, he won his 200th career match after totaling eight wins at Erwin High School in 1999 and 24 more at Hewitt-Trussville between 2000 and 2001.

Coming off a 2-0 loss to Briarwood, the Hornets were determined to give their head coach his 200th win against Talladega on March 18, and they did just that in a dominant performance.

Chelsea put together a dominant 10-0 performance to complete the shutout, improve to 9-4 on the season and give Miller the historic win.

The Hornets got the match started with a quick goal from Matt Reinsch, who drilled a shot from distance after winning a battle off a long kick from Chris Nettuno.

Javier Rivera-Miranda almost immediately after to give the Hornets a very quick 2-0 lead. Three minutes later, Chelsea earned a penalty kick, which Andrew Teixeira stepped up to make for a 3-0 lead in less than five minutes.

Shortly after, Matt Reinsch added his second goal before Teixeira picked up his second as well off a nice feed from Isaac Tindall to make it 5-0 Chelsea.

The Hornets continued a strong first half when Dylan David was able to come away with a loose ball before crossing over to Alex Trout for a 6-0 lead.

Chelsea had all the cushion it needed, but Reinsch and Teixeira went on to pick up hat-trick goals to complete their night, which was sandwhiched around a second goal from Rivera-Miranda to complete the 10-0 victory.

During the win, Reinsch’s three goals moved him to ninth in school history for most goals scored with 32.