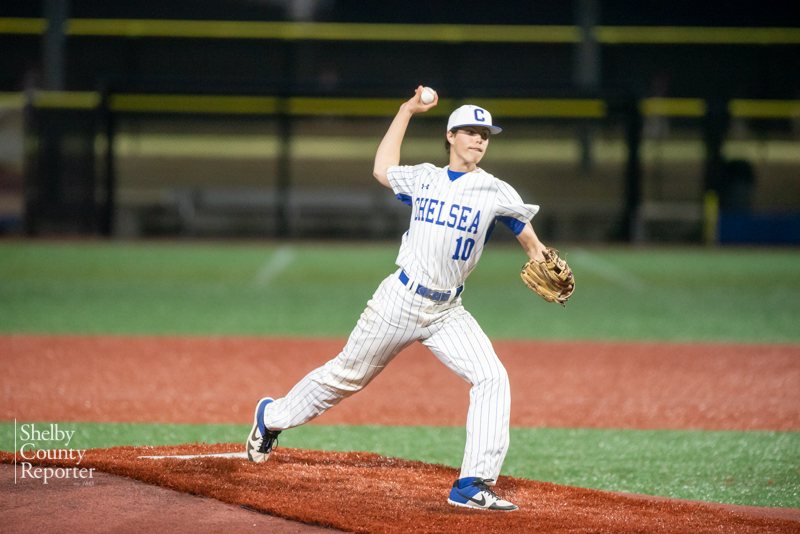 Chelsea’s Parker Szush helped Chelsea pick up one of their two wins in a tripleheader at Russell County on Saturday, March 20. (Reporter photo/Keith McCoy)

SEALE – Following three straight losses to top teams, the Chelsea Hornets bounced back with two wins in a tripleheader on Saturday, March 20.

In the opening game of the tripleheader, Chelsea took on Smiths Station and got a masterful performance from Brock Hill on the mound to pick up a 3-0 shutout victory.

The Hornets scored one run in the top of the first on an RBI single from Reid Gongwer, which was already enough for Hill on the mound. They went on to add two late insurance runs in the top of the sixth thanks to a two-RBI double from Kaleb Hester.

That gave Chelsea a 3-0 lead, which was plenty of cushion for Hill, who finished the game allowing six hits and no runs while striking out eight.

At the plate, Chris McNeill, Gongwer, Hester and Evan Jones each had a hit, while Hester added two RBIs and Gongwer one RBI.

The second game saw Chelsea take a 3-0 lead against Columbus in the first inning and hold a 3-1 advantage through five.

Columbus, however, scored six in the top of the sixth to comeback for a 7-3 victory.

Chelsea had four hits in the game from Adam Reaves, Gongwer, Hester and Cole Kennedy, while Connor Ball and Hester added RBIs.

The Hornets were able to play more comfortably in the third game of the tripleheader thanks to an eight-run first inning against Russell County.

Chelsea got a leadoff double from Reaves before McNeill was hit by a pitch to put two aboard. That was followed by an RBI single from Gongwer, which not only brought home the game’s first run but kept two on base with Hester stepping to the plate.

After waiting the first pitch, Hester drove a line shot to left field that cleared the fence for a three-run homer to put the Hornets on top 4-0.

Jackson Webster followed with a single before the first out was recorded. A hit batter and a groundout put two aboard with two down in the inning.

But the Hornets weren’t done scoring.

Tucker Garrett laced an RBI double to center field to make it 5-0 before Reaves followed with a two-RBI single. Following another single from McNeill, Gongwer made it three in a row when he singled to center field to drive home the eighth and final run of the inning.

That eight-run cushion set the stage for a 14-run outing for Chelsea.

Russell County scored two in the third after Chelsea took a 9-0 lead in the top half.

The Hornets then followed with three in the fourth and two more in the fifth to close out the 14-3 win in five innings.

Parker Szush got the win on the mound, going all five innings and allowing four hits and three runs with five strikeouts.

Gongwer led the way at the plate with a 3-for-3 showing with three RBIs. Hester added three RBIs with one hit, while Garrett finished with two hits, three RBIs and three runs scored. Reaves added two hits and two RBIs with two runs scored.

Chelsea outhit Russell County 12-4 to cap off a strong day.

Helena shuts out Pelham in area game, picks up…