Oak Mountain sweeps No. 4 Prattville ahead of spring break 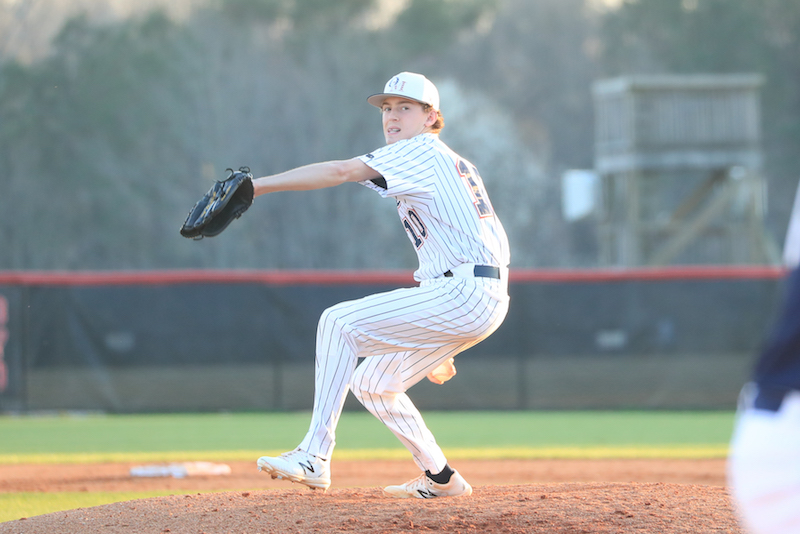 Oak Mountain’s Stephen Moraski pitched a no-hitter against No. 4 Prattville on Friday, March 19 to help the Eagles pick up a sweep of the Lions. (For the Reporter/Dawn Harrison)

NORTH SHELBY – Heading into spring break, the eighth-ranked Oak Mountain Eagles were able to sweep No. 4 Prattville in a doubleheader on Friday, March 19 with two dominant shutout victories, including one no-hitter.

Pitching was a major storyline in both games for Oak Mountain, who got a no-hitter from Stephen Moraski in one of the two wins and a strong combined outing from Connor Adams and Colton Smith in the other.

In the no-hitter, Moraski gave up just one walk to prevent a perfect game and struck out a remarkable 13 of the 18 batters he faced to pick up the win.

In addition to his dominant performance on the mound, the Eagles picked up 12 hits and scored multiple runs in all but two innings of the game to pick up a 10-0 win in six innings.

The Eagles started the scoring in the bottom of the first with their best inning of the game.

The first four batters of the game reached base safely with a wild pitch allowing Mitchell Pierce to score and a single from Maddox Macrory bringing home two more.

Carter Kimbrell brought home the fourth and final run of the inning on an RBI single to put the Eagles up 4-0.

Oak Mountain added two runs in the second, fifth and sixth innings to complete the win.

Macrory finished the game with a 3-for-4 performance and five RBIs to lead the way. Kimbrell and Jake Derecki each added two hits and one RBI, while Drew Rowland added one hit and one RBI.

In the second game, the Eagles broke open a scoreless game in the bottom of the third with a three-run inning and followed with a six-run inning in the fifth to complete the 9-0 victory.

In the third, Oak Mountain got singles from five different players and one walk to bring home the three runs.

Then, in the bottom of the fifth, the Eagles got a lead-off home run from Macrory before a single, a walk and another single loaded the bases with one out.

After a sac fly, a hit batter loaded the bases for Davis Gillespie, who doubled to right field to drive home three runs for an 8-0 lead.

That was followed by another double from Hunt to bring home one more run to close out the scoring in the 9-0 win.

Adams got the start on the mound and allowed three hits and no runs in six innings of work, while also striking out six. He was relieved by Colton Smith, who allowed one hit and struck out two in one inning.

After the two wins, Oak Mountain improved to 13-5 on the season.