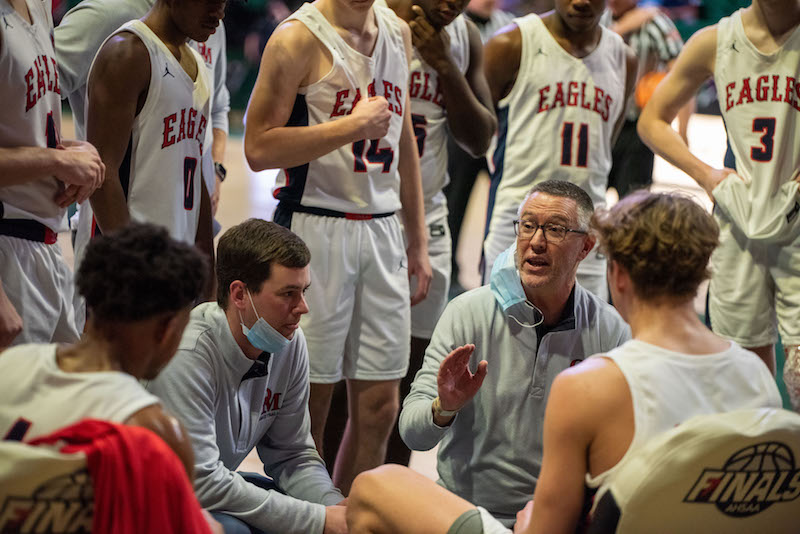 Oak Mountain head coach Chris Love has been named the county’s Coach of the Year for the second year in a row after leading the Eagles to their first state championship in school history. (Reporter photo/Keith McCoy)

Following a win against Hoover in the Elite Eight, Oak Mountain head coach Chris Love was of course ecstatic about his team advancing to the Final Four for the second year in a row, but something else deterred him while they waited to grab their regional championship trophy—water bottles around the team’s bench.

The head coach picked up every water bottle next to each chair on the sideline and walked to throw them in the trash can.

In that moment, he didn’t know his team was about to win two more games to claim its first state championship in school history. All he cared about was doing the right thing before the next team came to sit in those same chairs.

In that moment, Love led by example for his players, who followed in their coach’s footsteps all season to overcome obstacles and win the school’s first state championship to redeem last year’s championship loss.

His leadership as the head coach and the ability to coach his team through difficult injuries, including in the state championship game, was more than enough to earn Love Shelby County’s Coach of the Year award for the second year in a row.

Last year, he earned the award for leading Oak Mountain to the Final Four for the first time, and this year, he not only took them back, but helped them win a state title. 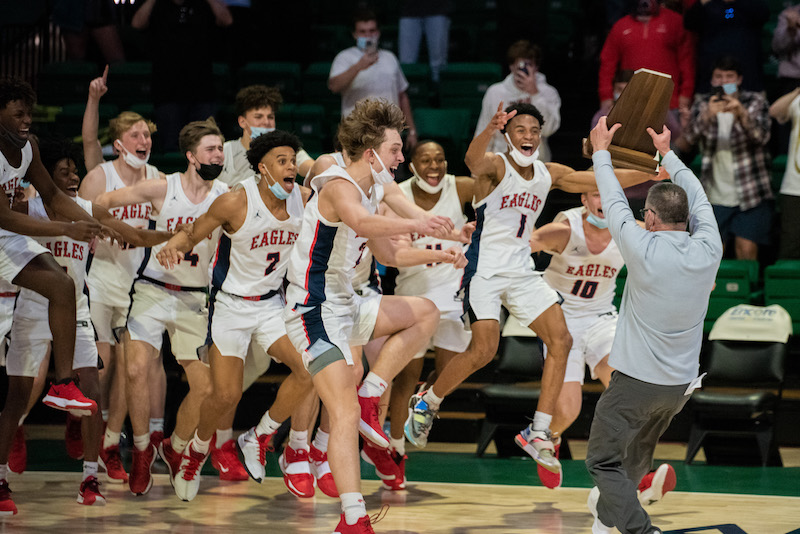 What made this year’s trek so impressive was a stretch that saw four of the starting five out of the lineup early in the year due to injuries, which could have put them behind the eight ball with the starting five not able to get in a rhythm ahead of area play.

But the Eagles fought through, despite only one senior in the starting lineup, thanks to Love and a group of relentless players.

“I’m just so happy and proud of our kids and they should be so proud of themselves for the adversity they handled this year with the injuries and all of that,” Love said after the championship win. “We started the year with injuries and ended the year with it, but our kids never wavered. We had so many opportunities to give in and point fingers, and some people probably were outside of our program, but we never did. Our coaches and players absolutely never did.”

Even though some might have panicked early in the season with such high expectations and the injuries causing them not to meet them, Love knew they would be fine.

“We struggled early in the year. It just took us a while. I kept trying to calm people down and say ‘We’re going to be OK.’ Because of these kids. Not because of me but because of these kids,” Love said. “They’re special and they wanted this season. I felt like we would play well when we got to the playoffs.”

And their postseason run was nothing short of spectacular. The Eagles held their final three opponents to 37 points or less to finish off the special season and won the championship down one starter after Brady Dunn went down with an injury in the first three minutes.

Love also took no credit for himself, giving it instead to assistant coaches Donald McMahon, Kevin McMahon, Kent Jackson and all of the players.

He was also challenged closely this year by Spain Park head coach Chris Laatsch, who led the Jags on a magical run to the Final Four. The two teams were close to playing each other for a state championship, but the Jags lost by one at the buzzer a game short of the championship. The turnaround he has led the Jags on in three years has been remarkable.

Calera’s George Drake also had a special season for the Eagles, leading his alma mater to the Elite Eight with one of the most balanced teams in the state.

But Love’s ability to get his team in a rhythm despite the injuries and do something that has never been done in his school’s history was too much to ignore this year.