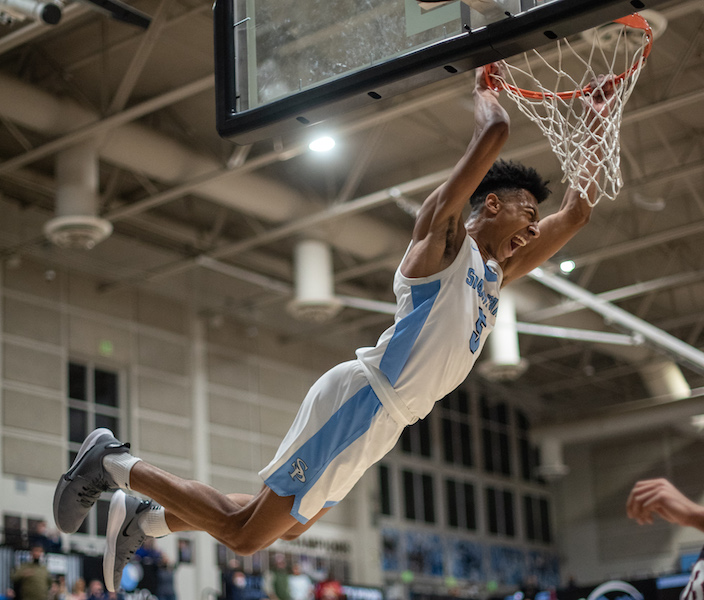 When he flew out of bounds after a ball late in the first half of an Elite-Eight game with Huntsville, Cam Crawford found himself being helped up be every teammate on the Spain Park bench.

That moment was a culmination of not only the growth of Spain Park as a team under head coach Chris Laatsch the last three seasons, but how well-respected Crawford was as a teammate.

“Cam, anytime I did something, he told me ‘We’ve got this, we were built for this,” said junior center Colin Turner following the end of the season. “He and all the other seniors were always encouraging me to keep fighting and were the best leaders.”

That was one of several moments Crawford was mentioned by his teammates or coaches down the stretch of the season without even being asked to.

His relentless effort and leadership not only willed Spain Park to the Final Four but earned him this year’s Shelby County Player of the Year award.

Crawford finished fourth in the county in scoring with 15.7 points per game, while also adding 5.8 rebounds and 1.9 assists per game. He was also third in the county with 52 steals.

He not only took over games, but was a leader for Spain Park this year in every facet of the game. While he didn’t average the most points or rebounds in the county, he was arguably the best leaders and has shown the most growth over the past four years with the Jags.

Without that, Spain Park likely wouldn’t have redeemed last year’s Elite Eight loss and made it to the Final Four this season.

Younger players respected Crawford and his confidence, while his work ethic also set the stage for his teammates to buy in. That was on display in the Elite-Eight win when every single player jumped off the bench to help him up, while his play was on display shortly after when he willed the team to victory with big baskets against Huntsville for a one-point victory.

“I feel like I’m one of the leaders of the team. I feel like I’m built for this. I’ve been playing basketball my whole life, and I live for big moments,” Crawford said after that win.

The Jags went on to lose by a point to Enterprise in the Final Four thanks to a remarkable buzzer-beater, which was a heartbreaking finish to Crawford’s senior season, but his mark on the program was left long before that.

“Last year, in the Elite-Eight game, he had statistically the worst game of his career,” Laatsch said after this year’s Elite-Eight win. “Tonight, he went for 21 and 13 and just made play after play. I know that’s in the back of his mind. And he rose to the occasion for that big moment. Not only did he do it statistically, but he did it as a leader during every timeout and in the locker room. The growth and maturity he has had as young man but also as a player, I’m just really proud of him.”

Noah Young was a player similar to Crawford this year at Oak Mountain who challenged him for the top award, while Montevallo’s Michael Jones was also in the running for the second year in a row after averaging 20 points per game.

But the ability of Crawford to evolve as a leader and a scorer on a Final Four team against the state’s most elite competition was too much to ignore, making him this year’s top player.