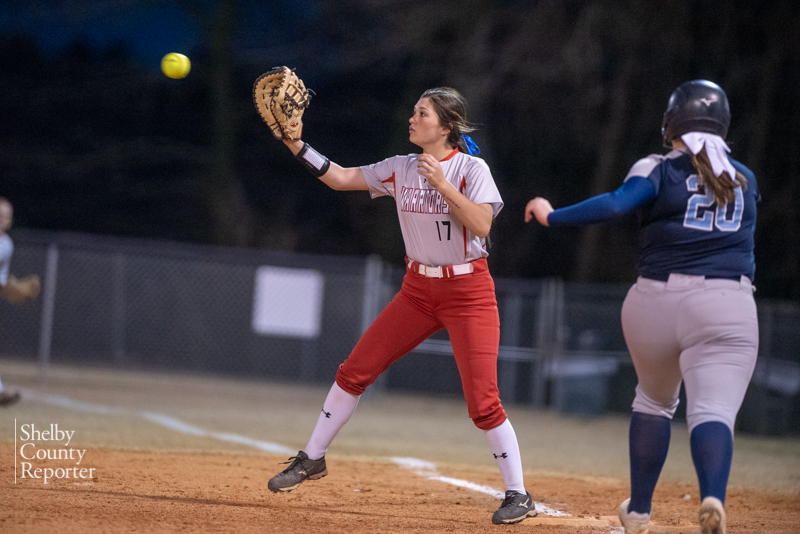 Madison Poplin, above, had a strong performance at the Gulf Coast Classic to help the Thompson Warriors finish the tournament undefeated as co-champions. (Reporter photo/Keith McCoy)

Following an area loss to Hoover on Friday, March 19, the Thompson Warriors entered the Gulf Coast Classic three days later on a mission to prove they are still one of the state’s best teams.

The Warriors did just that during their two-day spring break tournament, winning six games in a row to become co-champions alongside Hewitt-Trussville after the tournament was cut one game short due to weather.

Thompson dominated the first day, winning four games by a combined 34-5 to start the tournament 4-0 going into the second day. That’s when the Warriors took down Maplesville 6-0 and got revenge in a 4-3 win against Hoover.

They were set to take on Hewitt-Trussville in the championship game, but weather forced it to be canceled, making the two teams co-champions of this year’s elite field. 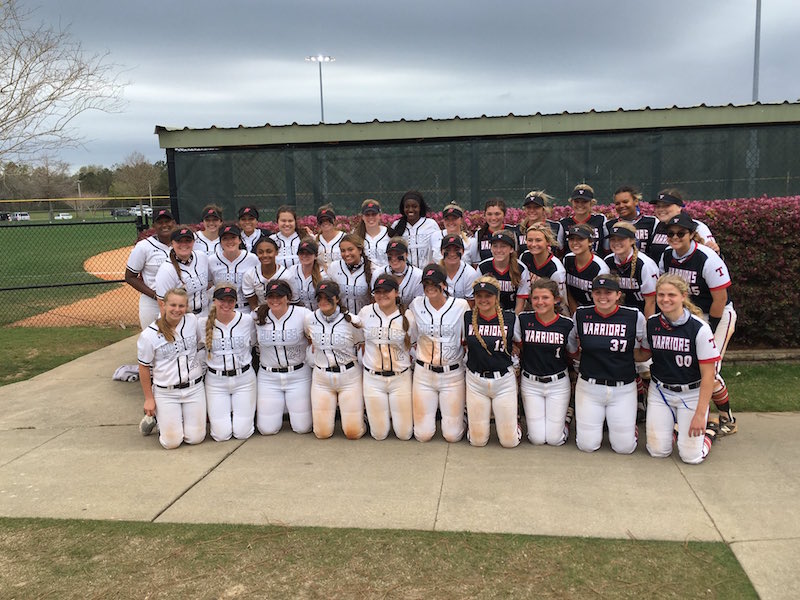 After dominated the first five games of the tournament, Thompson’s most thrilling game came against area foe Hoover.

While it wasn’t an area matchup, the two teams still left everything on the field in a compelling battle, which will continue down the stretch of the season as the two compete for spots in the playoffs.

Thompson struck first in the top of the third when a passed ball allowed Dailynn Motes to cross the plate for a 1-0 lead in the bottom of the third.

Motes reached base on a lead-off walk, then advanced all the way to third on a sac bunt from Jenna Williams.

The Warriors made it 2-0 in the bottom of the fifth thanks to an RBI single from Ella Pate, who drove home Williams.

Hoover, however, erased that deficit in the top of the sixth with two runs to force extra innings. The Bucs then took their first lead an inning later on a sac fly to go up by one and put pressure on Thompson.

Needing a run to stay alive, Motes stepped up again with an RBI single to knot the game back up at 3-3 and force an eighth inning.

After a 1-2-3 performance in the circle from Eleanor DeBlock, Laney Williams stepped to the plate and ended the game with one swing of the bat in the bottom of the eighth thanks to a walk-off RBI single for the 4-3 win.

Madison Poplin led the way with two hits, while Jenna Williams and DeBlock both had one hit apiece.

DeBlock pitched all eight innings and struck out six while allowing six hits and three runs.

Thompson started the tournament with a 12-2 win against Westside High School thanks to a 10-run second inning. The Warriors fell behind 2-0 after the first, but came back with 10 and two to finish off the game in three innings.

Motes, Laney Williams, Pate and Poplin all had two hits in the win, while Jenna Williams and Kaylee Cannon both had two RBIs. Pate, Poplin, Kendall Channell, Lindsey Cook and DeBlock all had one RBI.

Thompson used that to spark another strong offensive showing in the second game against Jeff Davis. The Warriors scored 14 runs in the first inning and won 15-0 in three innings.

Jenna Williams, Cannon and Poplin all had two hits, while Poplin had six RBIs thanks to a grand slam. Motes, Jenna Williams and Cook all had two RBIs in the win, while Pate and Cannon each added one.

Taking on a good Chilton County team next, the Warriors scored three in the second and three in the third to create separation in a 7-0 victory.

On the final game of Monday, Thompson made it four in a row with a 5-3 victory against Alexandria.

The Warriors scored three in the first and two in the second before fending off a rally from Alexandria in the top of the fifth.

Thompson came back Tuesday morning and picked up another shutout with a 6-0 win against Maplesville. The Warriors scored two in the first, one in the second and three more in the third to finish off the victory.

Motes, Poplin and Laney Williams finished off impressive tournaments with two hits each, while Poplin added two RBIs and Motes one RBI. Jenna Williams added one hit and two RBIs, while Channell had one hit as well.

With the six wins, Thompson improved to 21-4 overall this season.