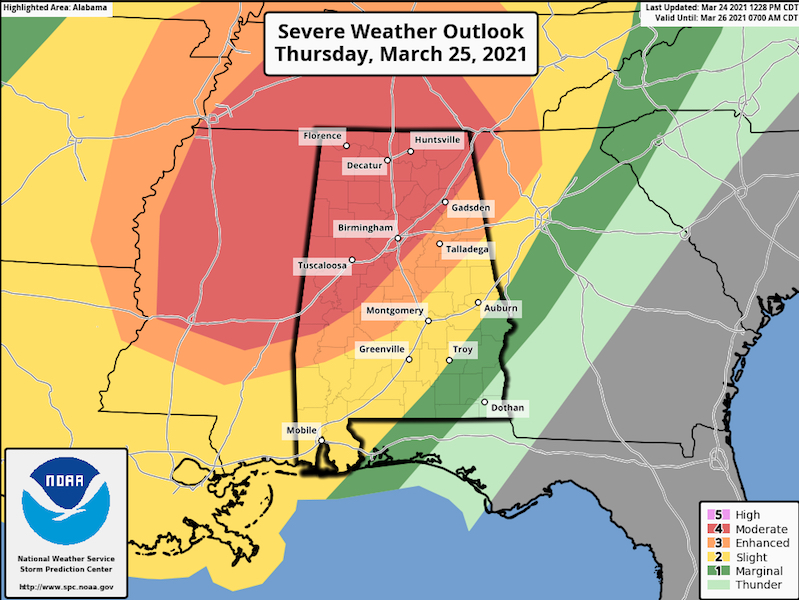 Another dangerous wave of weather is headed toward Alabama and Shelby County on Thursday, March 24, bringing the threat for strong tornadoes, damaging winds and hail. (Graphic by Scott Martin, info from the National Weather Service)

A week after many of us were spared the worst of a severe weather outbreak, another storm system is bringing the threat of severe weather once again on Thursday, March 24.

Last week’s threat started as an enhanced risk before being upgraded to a moderate risk and then a high risk within a 24-hour span.

The county is currently split in half with the northern portion under the higher moderate risk (four out of five) and the southern part of the county under an enhanced risk (three out of five).

The threat from both includes tornadoes, damaging wind and hail. The moderate risk category has the possibility for more violent tornadoes, higher wind speeds of up to 70 miles per hour and golf ball size hail.

The NOAA Storm Prediction Center has also said upgrading to the high risk category could happen due to the favorable environment for numerous supercells, which could produce violent, long-track tornadoes.

The current timeframe from the NWS shows severe storms possible between noon and 10 p.m. in Shelby County.