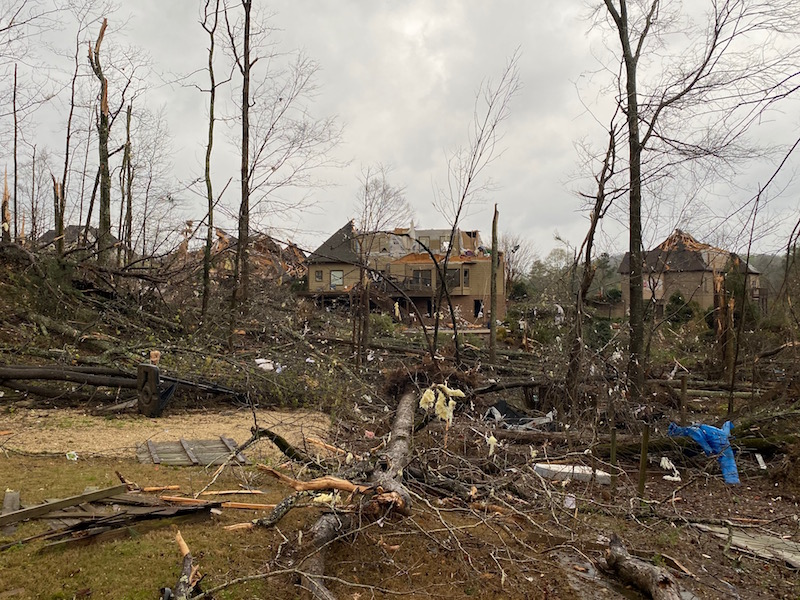 The National Weather Service is reporting that the tornadoes that ravaged Shelby County on March 25 were rated EF3 and EF1 respectively. (File)

The National Weather Service has confirmed that the two tornadoes that caused extreme damage throughout the Shelby County area on March 25 had EF3 and EF2 ratings respectively.

The storm that devastated the Helena, Pelham and northern Shelby County communities along U.S. 280 was reported to be an EF3 tornado.

According to the NWS, this storm followed a 34-mile path from southwest of Helena to the northeast of Vandiver and sustained violent winds reaching up to 140 mph, based on surveys of the damage throughout the area

The Eagle Point neighborhood was perhaps one of the most striking scenes in the aftermath of the violent storms. The path of the tornado is most evident here as trees lay collapsed on the ground and houses are missing roofs and walls next to homes that are virtually untouched.

The NWS also reported that the storm that devastated communities throughout the southern part of the county four hours later caused damage consistent with at least an EF2 tornado, but the damage is still being assessed.

This second storm hit the cities of Calera, Columbiana and Wilsonville severely damaging at least 12 homes in Calera and an untold amount in the other areas.

Thankfully, though the storm caused extreme damage in the county, the Shelby County Sheriff’s Office said that no fatalities had been reported.

Relief efforts are currently underway in each of the affected areas, and more information will be released as the damage continues to be assessed.

Those who have been affected are encouraged to check with their city governments, local churches and volunteer organizations who have all mobilized to collect supplies and provide help for victims of the storms.