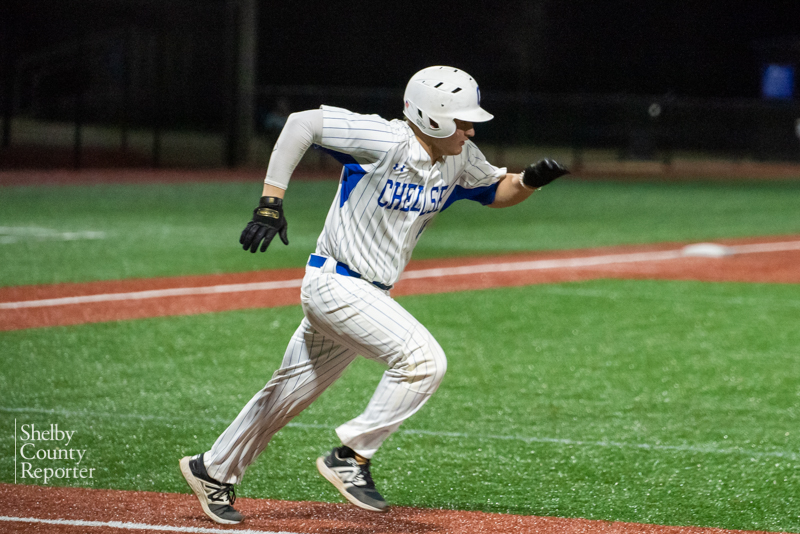 HOOVER – The Chelsea Hornets continued their difficult schedule at the Hoover Spring Break Tournament between March 24 and 27 with three big wins.

Playing a busy six games in three days, the Hornets finished the tournament 3-3, taking down Pelham 8-0, Houston (Tennessee) 4-2 and Hoover 12-1. In addition to the wins, Chelsea lost to Hueytown 6-4, Sparkman 9-3 and Collierville 9-5.

It continued a .500 season for the Hornets, who have seemingly traded each win for a loss along their difficult trek as they now sit at 13-13 overall ahead of big area matchups in the weeks to come.

In their three wins, Chelsea only totaled 12 hits but found a way to score a combined 24 runs.

Taking on Pelham in the first game of the tournament, a former area rival, the Hornets scored in the first three innings to take a 6-0 lead and closed the game out with two more in the bottom of the sixth for the 8-0 shutout victory.

Campbell McCluney was a big reason for the dominant showing. He struck out eight batters on the mound and allowed four hits and one walk.

At the plate, Christian Kallaher led the way for Chelsea with a 2-for-3 game featuring two RBIs. Chris McNeill also had two RBIs with one hit. Reid Gongwer, Connor Ball, Jackson Webster and Evan Jones all added one hit.

Their second win was a much tighter contest with Chelsea falling behind 1-0 after the top of the first.

Chelsea came back to score three in the bottom of the third thanks in large part to a two-RBI single form Gongwer.

Houston cut the deficit to one run in the top of the sixth, but Chelsea added an insurance run in the bottom half to finish off the 4-2 victory despite being outhit 3-2.

Brock Hill pitched the first three innings on the mound and allowed one hit and one run with four strikeouts to earn the win. Kaden Heatherly pitched 2 2/3 innings and struck out three while allowing two hits, three walks and one run. Jared Kaplan finished the final 1 1/3 innings by striking out three of the four batters he faced.

The final win of the tournament for the Hornets was another dominant one, this time against host Hoover.

Chelsea took a 6-1 lead through two innings and never looked back. Despite two scoreless innings in a row between the third and fourth, the Hornets came back to score six more in the fifth to finish off the 12-1 victory.

Gongwer’s presence on the mound was a big reason for the easy win. He kept Hoover guessing at the plate thanks to allowing just two hits and four walks with the lone run coming in the opening inning. He also struck out two batters in the complete-game effort.

Ball had three RBIs with a 1-for-3 performance at the plate, while Webster and Kaden Weldon added one hit and two RBIs apiece. Adam Reaves added one RBI, while Jones had one hit.