Helena wins three in a row at Hoover tourney 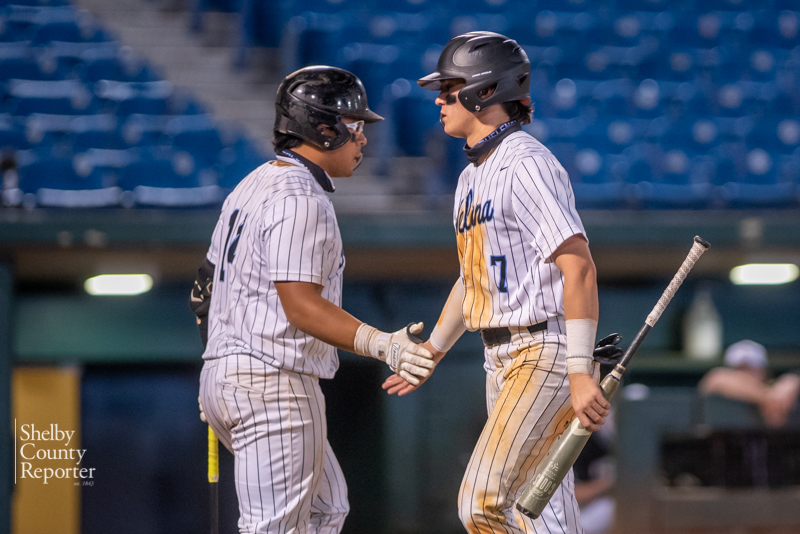 The Helena baseball team went 3-1 at the Hoover spring break tournament to improve to 17-5 on the season. (Reporter photo/Keith McCoy)

HOOVER – After a walk-off loss to Houston (Tennessee) on Wednesday, March 24 and a tornado tearing through the city one day later, the Helena Huskies baseball team was playing for more than itself the rest of the Hoover Spring Break Tournament.

The third-ranked Huskies returned to the field March 26-27 playing for their community and the extra spirit was evident in three consecutive wins by a combined 29-4.

Helena took down Hueytown 5-0, Gardendale 12-1 and Grissom 12-3 to finish the challenging tournament 3-1 overall to improve to 17-5 on the season.

In the opening game, the Huskies scored three combined runs in the first two innings and two more in the fifth inning for all five runs, while pitching and defense led to a shutout victory over the Golden Gophers.

They got impressive outings from Gavin Daniel and Preston Daugherty on the mound to keep Hueytown off the board. Daniel got the start and allowed four hits and two walks with three strikeouts in 4 2/3 innings pitched.

Daugherty closed out the final 2 1/3 innings and allowed just three hits with no walks.

At the plate, McGwire Turner went 2-for-4 with an RBI and two runs scored, while Griff Minor added two hits and an RBI.

Tyler Jon Santos and Noah Gwin each added one hit and one RBI, while Brody Moss had one RBI.

Helena came back on Saturday and got more strong pitching from Seth Gregory on the mound.

He tossed a complete game, pitching five innings and allowing just one run in the final inning. Gregory also struck out four and allowed seven walks but just two hits.

Landon Leake led the way offensively with one hit and four RBIs, while Brock Sisson added two RBIs. Moss, Turner, Minor, Connor Gibbs and Gwin all had one RBI as well.

Helena scored in each of its four innings at the plate with a seven-run second inning creating separation.

The team’s offensive presence continued on Saturday in the final game of the tournament when the Huskies scored 12 runs for a nine-run win.

Helena fell behind 1-0 in the first, but answered with a run of its own. Then, in the bottom of the second, the Huskies scored four runs to take control of the game.

Helena remained in front with a 6-3 going to the bottom of the sixth. That’s when the Huskies put the game to rest with a six-run frame to take a 12-3 advantage, which became the final score.

Turner and Minor both had two hits in the win with Turner adding two RBIs and Minor one. Ryan Storey led the team in RBIs with four thanks to an inside-the-park grand slam.

In addition to that, Moss and Alex Brown both finished with one hit and one RBI.

On the mound, Austin Collins got the start and win after allowing six hits and three runs in five innings, while adding two strikeouts.

Logan Barber finished the final two innings and allowed no hits with one walk and one strikeout to close a strong three games on the mound for the Huskies.