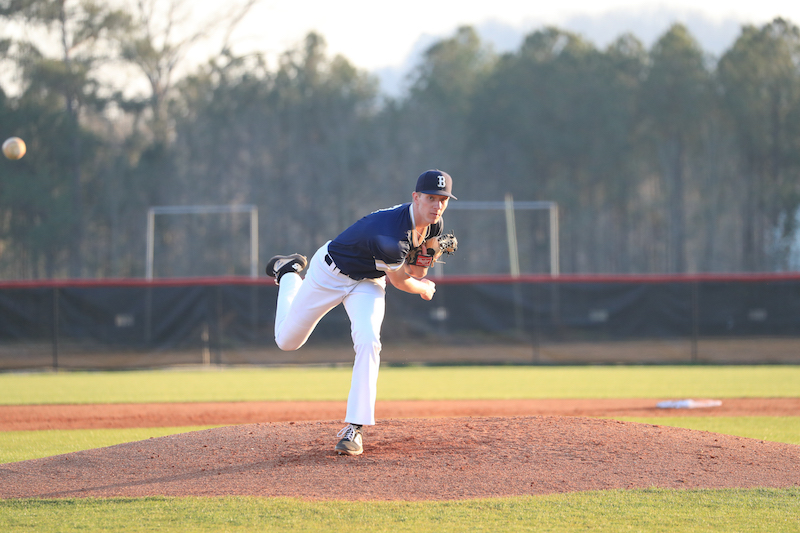 Briarwood’s baseball team hit a hot stretch of play thanks to four wins in a row before and during spring break. (For the Reporter/Dawn Harrison)

HOOVER – After a 0-4 start to the season, the Briarwood Lions have now won nine of their last 12 games, including two over spring break at Hoover’s spring break tournament March 26.

The Lions didn’t play as many games as scheduled due to tornadoes slamming the area on Thursday, March 25, but they took advantage of the opportunities they got on the field one day later.

They used an impressive offensive showing during their two games to score 25 combined runs between an 11-7 win against Class 7A No. 9 Prattville and a 14-9 win against Collierville.

The two wins gave Briarwood four in a row after they Lions beat Hoover 4-3 and Hueytown 3-1 going into spring break. It also marks the second four-game win streak for the Lions this season against a difficult schedule, as they now sit at 9-7 overall this season.

In the first game of the tournament against Prattville, both teams had spurts early in the game that looked like it could make the difference in the outcome.

After Prattville grabbed the early 1-0 lead, Briarwood came back in the bottom of the first with four runs to storm in front.

But Briarwood had a response of its own.

The Lions scored seven runs in the bottom of the third to quickly regain the lead again, and this time, they didn’t relinquish it.

Prattville scored one more run in the top of the sixth, but Briarwood didn’t give up another one the rest of the way, leading to the 11-7 win.

Wesley Helms, Parker Hutson and Pierce Covin all had two hits and two RBIs in the win, while Cal Higdon added one hit and two RBIs. Eli Steadman joined the two-hit club with two of his own, while Brady Waugh and Luke Sibley each had one hit and one RBI.

That was just the start of a strong offensive afternoon for the Lions, who came right back to post 14 hits and runs in the second game against Collierville.

Briarwood scored three in the bottom of the first to get off to another strong start with a 3-1 advantage.

The Dragons came back to take the lead in the top of the third at 4-3, but the Lion regained it again in the bottom half with two more runs.

Up 5-4, the Lions put together a four-run inning in the fourth and seemed to separate themselves, but Collierville responded with four in the top of the fifth to draw within a run.

For the second game in a row, however, Briarwood put together a big inning to create needed separation when the Lions scored five runs in the bottom of the fifth.

The Dragons could only answer with one in the top of the sixth, leading to a 14-9 win for Briarwood.

Brady and Tyler Waugh combined for six hits and six RBIs in the win, while Hutson added four more RBIs on two hits. Steadman put together three hits and scored three runs, while Helms notched two hits and had one RBI.