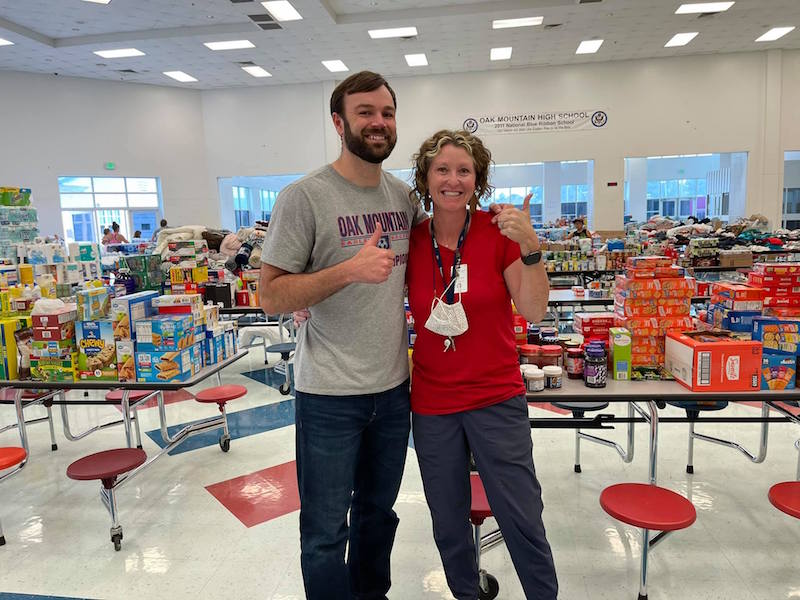 With one tornado already passed and another barreling toward Shelby County, Oak Mountain High School assistant principals Sandy Evers and Kyle Dudley were inside the school coming up with a plan.

Despite being out on spring break, the two administrators went to the school to check on it after a tornado struck less than a mile down the road from it and their homes and forced alarms to go off inside OMHS.

Still not fully aware of the damage that happened to the community along Alabama 119 and to areas such as Eagle Point, Heardmont Park and both the elementary and middle school, they were starting to see the devastation in pictures on social media.

That’s when Evers and Dudley got on the phone with Oak Mountain Principal Dr. Kristi Sayers and tried to figure out a plan, knowing the community around them would step up in a time of need.

“It was an overwhelming moment, that’s for sure,” Evers said. “I actually live not even a quarter mile from the high school. We were taking shelter, and after that very first tornado hit, once I knew my family was safe and we came out from our shelter, it turned to what can we do and what areas were hit.”

She immediately started hearing that Eagle Point had been hit hard and knew how many kids and families that were part of Oak Mountain’s schools lived in that area.

“Different from a lot of other cities, we don’t have a municipality. We are different from that sense, so a lot of times, the community looks to the school system for help,” Evers said. “So we knew we needed to take action and serve our people.”

With Evers and Dudley up there to check on the school and turn off any alarms, they immediately said “What can we do?”

Being off of Valleydale and Alabama 119, the school was far enough away from the worst hit areas that people could find their way to the school for donations, so they decided to establish a tornado relief and donation spot in the lunchroom.

Evers immediately jumped on Google to search for what supplies people need following tornado damage to try to get any information they could.

“We just started setting up shop,” Evers said. “We reached out to other principals telling them what we were going to do and started spreading the word.”

That’s when their phones started sending off a warning signal of another tornado headed toward Shelby County.

The two quickly jumped in their car to head home for safety from the next storm, but the groundwork for what would become a major community outreach effort had been laid.

“We felt confident in our game plan and sent it out over social media and sent a volunteer sheet for our teachers to sign up with,” Evers said. “We knew they would help organize it and get what we needed set up. That filled up in minutes. As I always say, team work makes the dream work.”

In less than 24 hours, the school filled the lunchroom comparable to a Costco or Sams Club thanks to tremendous support from the community and local businesses around the area.

The school was forced to stop taking donations late on Friday afternoon due to the lunchroom being filled food, drinks, clothes and other recovery items.

They received an estimated $30,000 in donations, Venmo and gift cards following the outpouring of support.

“It brought tears to your eyes to see how the community cares so much,” Evers said. “It was special to see everyone come together to take down an enemy like this natural disaster.”

That Friday, Shelby County Schools Superintendent Dr. Lewis Brooks joined the effort and helped take donations to residents of Eagle Point. Brooks was joined by a caravan of other cars, all of which were led by School Resource Officer Thomas Nordyke to the neighborhood where they then distributed items to those in need.

Then, less than 48 hours after the tornado struck on Saturday, all of the supplies had found a home. And the support was so great, items made their way not only to local residents along Alabama 119 in different neighborhoods, including Eagle Point, but went to other areas such as Calera, Columbiana and Ohatchee.

In addition to that, football players loaded up their trucks and drove into the Eagle Point neighborhood and other areas to help deliver items and help remove debris from damaged homes.

“It was neat to see how all hands were on deck,” Evers said.

But the help doesn’t stop there. Despite the high school having to stop taking bulk donations due to students returning on Monday, March 29, they’re still taking Venmo and gift card donations and finding other ways to help in the community.

“It’s not a sprint,” Evers said. “A lot of people need us right now, but they also need us for the long haul. While it has been amazing right now, we need to continue this help, both from a financial standpoint and physical labor.”

You can still take any Venmo and gift cards to the front office at the high school to help those in the community. Evers said they have a list of families in need and will immediately turn around and share those donations with them.

“This whole experience is absolutely eye opening,” Evers said. “You hear about tornadoes, but it truly breaks your heart to ride through some of these neighborhoods and see houses where you know the people who live there and realize their home is destroyed. It’s gut-wrenching. I thank the Lord there were no major causalities or injures.”