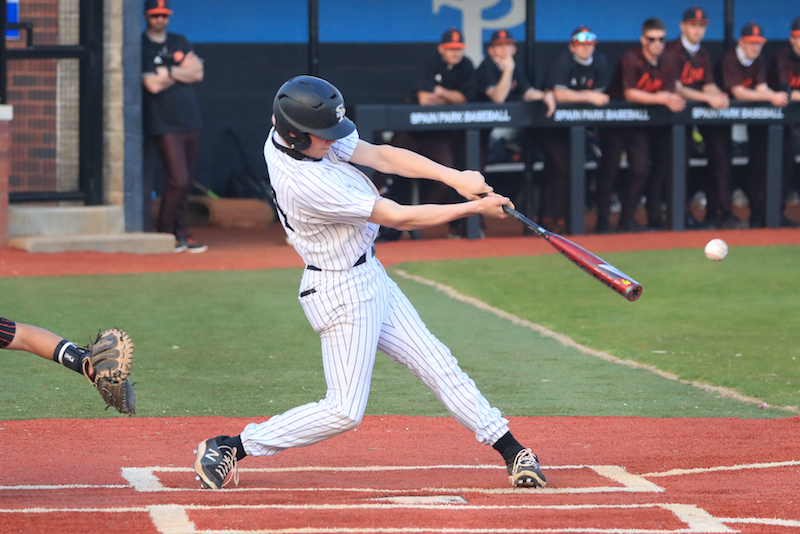 The Spain Park baseball team picked up three wins at the difficult Hoover spring break tournament to improve to 14-7 on the season. (For the Reporter/Dawn Harrison)

The Jags, who entered the tournament with three consecutive losses, two by one run, were looking for confidence and quickly got it with two wins in a row against Gardendale and Collierville to kick off the tournament and snap the losing streak.

Spain Park went on to lose to Hueytown 8-6 when the tournament resumed on Friday, but bounced back with a 3-2 win against Lincoln County later in the day before losing another tight contest in a 6-5 battle with Grissom on Saturday to finish the tournament 3-2.

Opening the tournament with Gardendale, Spain Park scored four combined runs in the first two innings to sprint out of the gates.

That was more than enough cushion for Evan Smallwood and Hayden Humber on the mound. They combined to allow six hits and one unearned run with three strikeouts. Smallwood had all three hits and allowed the six hits and one run in 5 1/3 innings, while Humber finished off the game and walked two but allowed no runs.

At the plate, Cole Edwards, Josh Harrington and Wilkins Hunter each had one hit and one RBI in the win. Despite being outhit 6-3, the Jags picked up the four-run win after Gardendale left 11 runners on base.

Spain Park’s bats woke up in the second game on Wednesday with nine runs in a 9-0 shutout victory of Collierville.

The Jags scored three in the third and six in the fifth, while Collierville never got in a rhythm at the plate. Harrison Holcomb was a big reason for that. He pitched 6 1/3 innings on the mound allowing three hits and no runs, while striking out five batters. Wes Sanders finished off the final inning, striking out both batters he faced.

At the plate, the balanced continued as five different players picked up hits. Connor Eberhardt, Trent Thompson and Howie Berke each had one hit and one RBI, while Michael Glick and Harrington had the other two hits.

Spain Park’s final win of the tournament came against Lincoln County after being able to fend off a comeback attempt.

The Jags scored all three runs in the top of the second thanks to a Glick solo homer as well as a bases-loaded walk and hit batter.

After Lincoln scored on a steal of home, they also had the game-tying run on third base.

Spain Park’s Humber was able to force a ground out , however, to get out of the jam and help the Jags preserve the tight win.

Eberhardt, Smallwood and Glick each finished with one hit and one RBI, while Harrington and Ryan Cole added one hit apiece.

Eli Copenhaver got the start on the mound and tossed six innings. He allowed five hits and one unearned run while posting four strikeouts in the win.

In the two losses, the Jags had a chance late with comebacks in the seventh inning of both games, but ultimately fell short in each.

Against Hueytown, Spain Park trailed 8-1 going into the bottom of the seventh and scored five runs to sniff a comeback, but couldn’t quite close the gap.

Then, against Grissom, the Jaguars overcame giving up a 3-1 lead in the bottom of the sixth by scoring two in the seventh to tie the game at 5-5. Grissom, however, got a walk-off RBI single with the bases loaded to pick up the one-run victory.

Helena wins three in a row at Hoover tourney