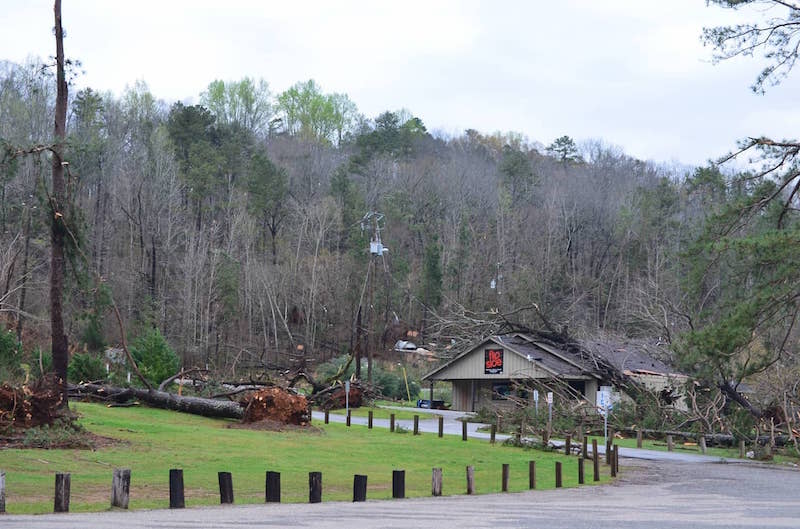 Flip Side Watersports in Oak Mountain State Park received significant damage from last week's tornadoes and is having to pay for most of it out of pocket. (Contributed)

NORTH SHELBY — The EF3 tornado to sweep through northern Shelby County on Thursday, March 25 damaged much of Oak Mountain State Park, which included destruction to much of Flip Side Watersports.

The storm devastated the businesses significantly, and according to owner Jeremy Talbot, it could possibly close them down for the next two months.

Last Thursday, Talbot and his wife Kristen, who co-owns the Flip Side with him, had been alerted of the approaching storms and spent the morning securing their ramps and anchoring their boats in preparation for the worst.

“We just tighten everything up as we normally would do during hurricanes and other severe weather,” Talbot said.

As the tornadoes approached, Talbot and his family watched the storms on the news from their home. Talbot heard that one of the tornadoes had veered down Alabama 119 and was headed toward Oak Mountain State Park.

“We were thinking it was up near the interstate, but it was already knocking on the back door of the park, and they zoomed in and showed the street and radar coverage of where it was,” he said. “I told my wife ‘It just hit us. It went right on top of us.’”

Talbot just watched the news in awe. That’s when the phone rang. It was the park staff informing him that his business had in fact been damaged.

Following the storm, Talbot and the park staff surveyed the damage to the park and his business. Debris and trees blocked the trails leading to Flip Side, and the damage was so severe that park staff could not drive their vehicles but instead had to hike through a mile of destruction.

Once they arrived, Talbot assessed the full extent of the devastation.

“Sure enough, it was a direct hit. For the most part, everything was gone. It looked like a warzone” he said.

Talbot’s entire vessel fleet was destroyed with many boat racks being uprooted, resulting in boats being scattered throughout the park’s surrounding woods. Many boats were either smashed into pieces or punctured with holes.

“We are still finding boats in the woods, and if the trees didn’t fall over them, they were broken in half. It snapped them like toothpicks,” he said.

Some of the most severe damage occurred to Talbot’s pro shop. Two trees fell on the building, blocking the entrance, while another tree fell on his trailer. Inside the building, all the windows had been shattered and a tree had pushed one of the walls off the building’s foundation.

“I had to cut through two trees just to get in. I chained-sawed my way in through the back gate,” he said.

His friends helped with cleaning debris, but the damage was so extensive that Talbot had to contact his insurance company.

However, Talbot’s insurance policy was a liability-only policy and did not cover property damage, which means that he will have to pay for the majority of the repairs out of pocket.

“The wind just went right out of my sails. I think I sat down for a good five minutes just thinking this is it,” he said.

Talbot said the tornadoes have placed his business and family in financial jeopardy.

Talbot said the damage is so significant that he created a GoFundMe page earlier this week hoping to raise $25,000 dollars to help fund the repairs.

Talbot, 37, is a Trussville resident and has called Alabama home since 2002, while he and his wife have owned and operated the business just off Alabama 119 and U.S. 280 inside Oak Mountain State Park since 2014 after living out their dream of opening a water ski park.

The Talbots had just begun their eighth business season last week when the tornado struck.

Immediately after posting the GoFundMe page, people from all over Alabama and the United States began donating money. Currently, the fundraiser has garnered $17,268 from 130 donors.

“It has been incredible. We have received a huge amount of support, but there is still an enormous amount to do just to get everything rebuilt, but we’ll do it,” he said.

Even with the money raised currently, Talbot estimates it will be two months before his business is fully operational again, but hopes for his business to be rebuilt in time for the summer season, one of the busiest times of the year for his business.

If you’d like to help with the fundraising efforts, you can visit Gofundme.com/f/flip-side-watersports-tornado-recovery.