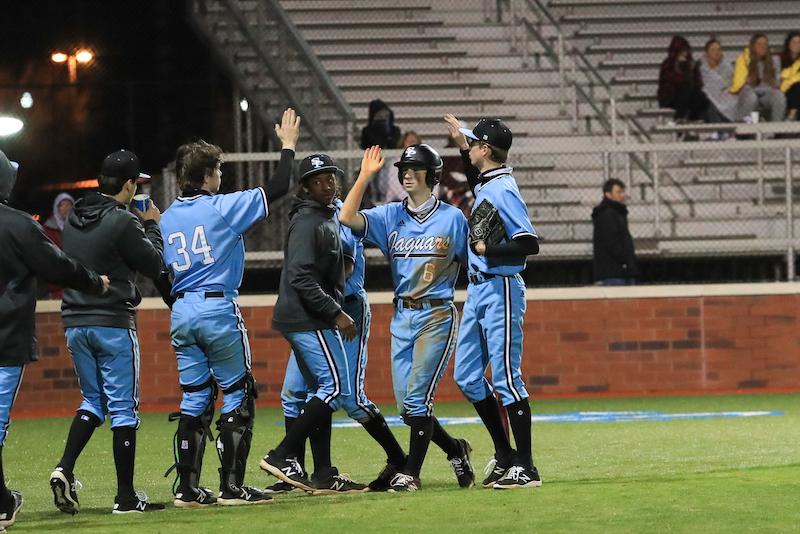 Howie Berke, No. 6, drove home two runs with one hit in Spain Park’s 5-0 shutout victory against Thompson on March 30. (For the Reporter/Dawn Harrison)

Any run support was enough for Holcomb, who allowed five hits and one walk on 61 pitches, making quick work of the Warriors. He also added two strikeouts to grab the win.

The win comes on the heels of a 3-2 performance at the Hoover spring break tournament, as the Jaguars have now won four of their last six games against a difficult schedule to improve to 15-7 on the season.

Early in the matchup, both teams struggled to find any consistency at the plate, which led to a scoreless game all the way through the top of the fourth.

Then in the bottom half of the inning, Spain Park changed that with three consecutive one-out singles from Cole Edwards, Trent Thompson and Michael Glick.

That loaded the bases for Charlie Goodwin, who hit a hard ground ball to second base, which was tough to handle and allowed both Edwards and Thompson to cross the plate for a 2-0 lead.

Spain Park left two runners in scoring position to end the inning but had taken the lead in a game where offense was tough to come by.

After a scoreless fifth and top of the sixth, the Jaguars stepped back to the plate in the home half of the sixth and added some insurance to their lead.

A walk, a hit batter and a single allowed Edwards, Thompson and Glick to all reach base safely yet again.

After a fielder’s choice and a strikeout put two outs on the board, it looked like the Jags may strand more baserunners, but that changed thanks to Howie Berke.

Berke singled through the left side of the infield and drove home all three base runners to extend Spain Park’s lead to 5-0.

Holcomb then stepped back on the field and closed an impressive outing by putting the Warriors down in order to complete the win.

Berke finished 1-for-1 with two RBIs in a pinch-hitter role, while Goodwin added the other two RBIs. Glick finished with two hits, while Edwards and Thompson each added one hit.

Thompson wsa led by Gavin Chandler with two hits in the loss, while Logan Braunschweig, Cade Watts and Braxton Turnbow each had one hit. Turnbow also pitched the entire game, allowing six hits and three earned runs. He struck out four and walked one.