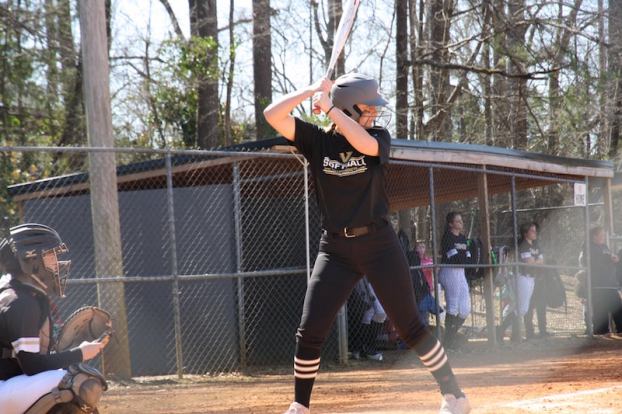 Vincent’s softball team put together a 10-1 win in its first game in three weeks to continue a win streak and improve to 12-3 on the season. (Contributed)

VINCENT – A long break didn’t slow down the Vincent Yellow Jackets. After taking three weeks off, they returned to the softball field on Tuesday, March 30 looking to continue what was a five-game win streak in an area game against Central Coosa County.

They did just that in a dominant 10-1 win against the Cougars to not only pick up their eighth win in their last nine games but improved to 4-0 in area play.

The Jackets (12-3) fell behind 1-0 in the top of the second be responded with three in the home half and scored 10 unanswered the rest of the way to pick up the win.

Vincent’s second inning started with a hit batter to put the lead-off hitter on base. After an out was recorded, Takyla Smoot singled to put two aboard.

Following a run during McKenzie Fields’ at bat, she knocked a triple to center field to drive home another run and give Vincent a 2-1 lead.

A sac bunt from Chloey Carroll then made it 3-1 at the end of two.

Maddy Walker added a run in the third with a solo home run, while Smoot did the same in the fourth.

Up 5-1, Vincent added four more in the bottom of the fifth with a two-run home run from Lela Beck and RBI singles from Smoot and Carroll.

The final run came in the bottom of the sixth when Walker added her second solo home run to finish off the 10-1 victory.

Walker finished the game 2-for-3 with two solo home runs, while Smoot finished 3-for-3 with a home run and two RBIs.

Walker also picked up the complete-game win in the circle. She allowed six hits and one unearned run, while striking out eight batters.