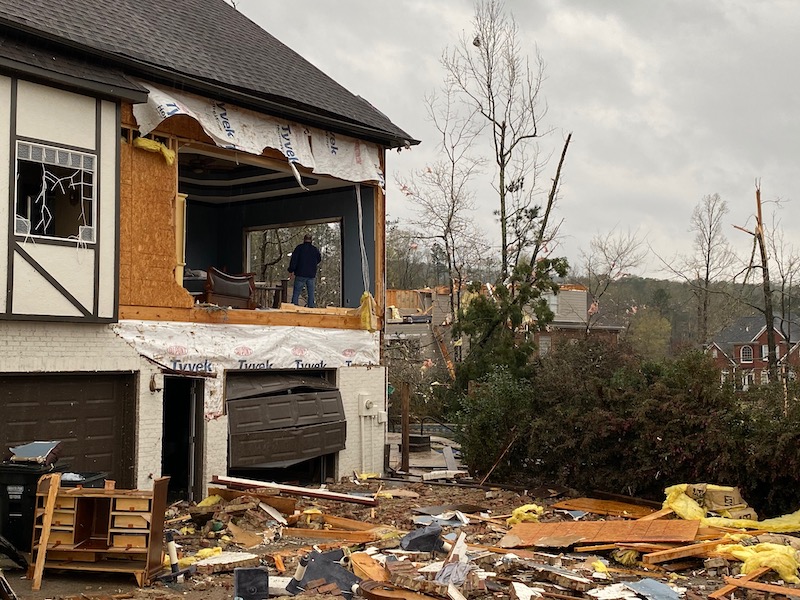 Stepping into my car on the side of Eagle Hollow Drive in Eagle Point, the first thing I did was call my wife. After holding my emotions in check for two hours, I finally lost it and broke down in tears.

I couldn’t believe what I had just seen following a violent tornado through northern Shelby County, including the Eagle Point neighborhood.

Homes were heavily damaged and even flattened, and a clear path of destruction had torn through the neighborhood.

One couple had to be rescued from their home after it collapsed, and while the house’s roof, which was now on the ground, had the word “OK” on it, everyone in the area was heartbroken at what they just witnessed.

Everyone did walk away from the storm with their life, which is a blessing, but the toll was devastating nonetheless, and it spread across the county.

With two, long-track and violent tornadoes barreling through the northern and southern portions of Shelby County, communities like Helena, Pelham, Indian Springs Village, Oak Mountain, Greystone, Calera, Columbiana and Wilsonville are all dealing with a horrifying aftermath.

After walking through much of the destruction in the north part of the county, I looked down at my ruined shoes and khaki dress pants and remember thinking how lucky I was to have both as I looked at pieces of homes, clothes and belongings scattered across the area that people had lost due to the tragic storms.

In what one neighbor said took five seconds, life went from normal to recovering from a violent tornado that left many without a home.

As people shoveled debris, sawed trees to move them out of the road and off of cars, driveways and homes, and packed what they could before finding a place to stay, emotions were high.

But neighbors rejoiced that no life was lost, and throughout the county, residents and first responders were quick to offer help.

People in each community that was hit rapidly started walking their neighborhoods to lend a hand to those in need, while first responders promptly made their way to houses for any rescue efforts and to make sure everyone was accounted for.

Following the phone call from my wife, I immediately drove to my parents’ house off of Dunnavant Valley Road, and on my way saw where the tornado continued over the mountain through Greystone Farms and across the highway—a mile from where my parents live.

I immediately gave them a big hug and told them how fortunate we all were, then did the same with my wife and even let my puppy lick me as much as she wanted to.

Many of us still had our homes and were actually OK after the storms, but others are at a complete loss right now and have a long road ahead.

For those of us who were spared, be grateful and take this as an example of what can be ripped away from you at any given time.

And for those who are recovering, we have you in our thoughts and prayers and know Shelby County is ready to step up and help you get back to your normal life.

Severe weather offers another chance for us to do…