Spain Park boys starting to make noise as No. 2 team 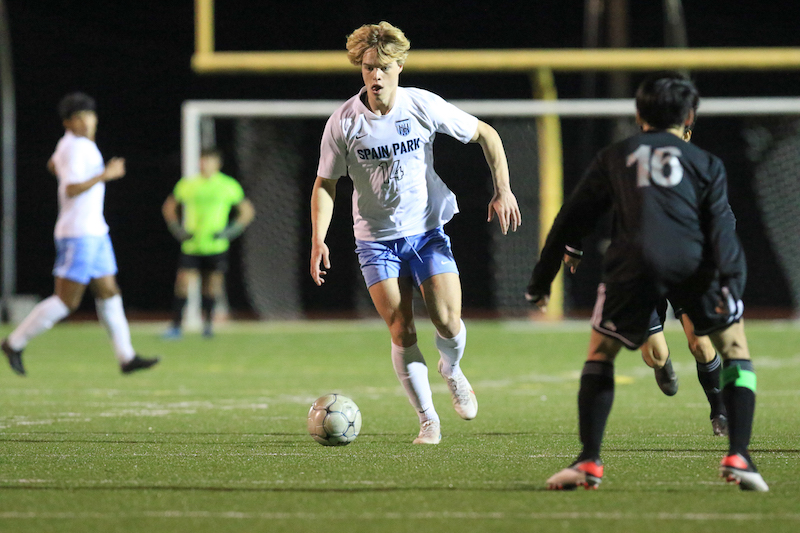 The No. 2 ranked Spain Park Jaguars took down county foe Chelsea in a ranked matchup by a final of 5-2 to improve to 10-1-2 on the season. (For the Reporter/Dawn Harrison)

CHELSEA – The Spain Park Jaguars traveled to Chelsea High School on Tuesday, March 30, looking to continue an impressive winning streak and season against the Hornets.

Spain Park entered the match 9-1-2 on the season and as the new No. 2 team in the Class 7A standings, but Chelsea’s No. 7 ranking in Class 6A showed the Hornets were a team that wouldn’t go down easily.

The Jags, however, have quickly established themselves as one of the favorite sin the 7A classification, and it showed early in the match against Chelsea.

They came out and scored two quick goals in the first 20 minutes on a perfect volley and then an easy put back to jump out to a 2-0 advantage.

Chelsea, however, showed some fight and responded two minutes after the second goal with a goal of its own. That cut the deficit in half for the Hornets, making it a 2-1 game.

A few minutes later, it looked as if the Hornets had punched through the equalizer, but an offside call on Javier Rivera-Miranda wiped his goal off the scoreboard.

From there, Spain Park capitalized with three goals in a row to take a 5-1 lead.

Chelsea scored one more goal, but never could recover on a night where the Jags were in attack mode offensively.

With the 5-2 victory, the Jaguars won their sixth in a row and seventh in their last eight games to improve to 10-1-2 on the season.

Spain Park’s two ties this season are against No. 4 Grissom and No. 6 Thompson, while the lone loss came in a 2-0 match against No. 1 Hoover.

The Jags are also 3-0 in area play with one win against each area opponent. They beat Hewitt-Trussville 3-0, Vestavia Hills 2-1 and Gadsden City 6-0.

Chelsea is now 9-5 on the season but 0-3 in area play. The Hornets will hope to close the final stretch with wins against Mountain Brook, Homewood and Briarwood to try and earn a spot in the playoffs.

Briarwood girls continue to roll with win against Westminster