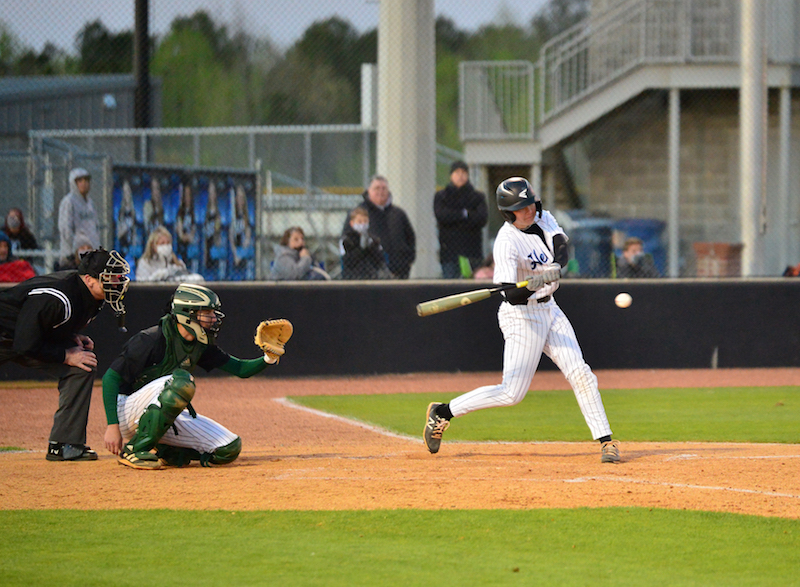 Helena's baseball team completed a sweep of Pelham on April 1 with a 5-1 victory to lock up a playoff spot. (For the Reporter/Jeremy Raines)

HELENA – The Helena Huskies won their 10th game in the last 11 matchups on Thursday, April 1 with a 5-1 victory against rival Pelham to officially lock up a playoff spot.

With the win against their rival, the Huskies improved to 4-0 in area play, while Calera and Pelham both have at least three losses this season, guaranteeing Helena at least one of the two playoff spots from the area.

They’ll still have one series left with Chilton County to determine who will be the one seed and whether or not it will be Calera or Chilton joining them in the postseason.

After a grand slam led the Huskies to a 6-3 victory on Tuesday, they came right back on Thursday with three quick runs in the opening inning to grab the lead.

Following one run from Pelham in the top of the first on an RBI single from a hot JD Wilkins, Helena responded with a two-out rally in the bottom half.

An error, a single and a walk loaded the bases for Connor Gibbs, who immediately cleared the bases with a three-RBI single to center field to put Helena in front 3-1.

After a couple of 1-2-3 efforts at the plate for each team, Helena came right back in the bottom of the third with two more runs thanks to a ground-out RBI from Griff Minor and another RBI single from Gibbs to bring the final runs of the game home.

Mitchell Rhodes was special on the mound for Helena, allowing three hits and one run in a complete-game win that saw him strikeout 14 of the 28 batters he faced in the game.

At the plate, Gibbs finished 2-for-3 with four RBIs to lead the way, while Tyler Jon Santos added two hits in three at bats as well. Minor finished with one RBI, while Landon Leake added one hit and one run.

With the win, Helena improved to 19-5 overall with its only loss in the last 11 coming by one run to Houston (Tennessee).

Helena shuts out Pelham to remain unbeaten in area…