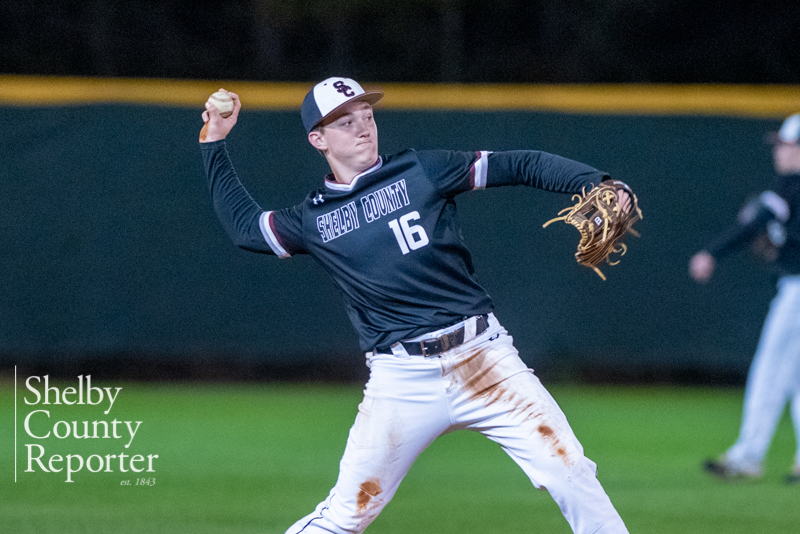 Connor Aderholt, above, had a stellar game for the Wildcats to help them complete a series sweep of Central-Coosa County on April 1. (File)

COLUMBIANA – Connor Aderholt’s complete-game shutout and a 10-hit, 10-run performance were more than enough to give the Shelby County Wildcats their fifth win in a row and a sweep of Central-Coosa County on Thursday, April 1.

Following an 8-3 win on Tuesday, the Wildcats came right back on Thursday afternoon determined to start area play 2-0 and continue their hot play after recently earning a spot in the top 10 of the Class 5A rankings.

Aderholt himself was more than enough to help Shelby County pick up the win after tossing a complete game that featured nine strikeouts. He only allowed two hits and didn’t give up a run to get through the six-inning 10-0 win in 68 pitches.

His teammates gave him all the breathing room he needed in the opening inning of the game when JT Pennington blasted a two-run shot over the right field wall to pick up two of his four RBIs in the game and give Shelby County the early 2-0 lead.

Two innings later, the bats remained on fire when Logan Starnes led off the inning with a single. Following a strikeout, Matthew Pearson singled to drive home Starnes for a 3-0 advantage.

Then, JP Fox and Pennington came through with back-to-back doubles. Pennington’s drove home two more runs in another big spot to put the Wildcats on top 5-0.

Shelby County scored four more in the fifth on an RBI-bunt from Aderholt, an error from the catcher and a two-RBI single from Starnes.

That put the Wildcats in front 9-0 going to the sixth inning. After a quick top of the sixth, Shelby County came back to the plate and ended the game with an RBI single from Jace Bolan to finish the run-rule victory.

Pennington finished 2-for-3 with four RBIs and two runs, while Fox went 1-for-1 with four runs scored. Starnes added a perfect 3-for-3 game with two RBIs in the win. Pearson and Bolan each had one hit and one RBI.

The Wildcats are now 12-7 on the season following the win.