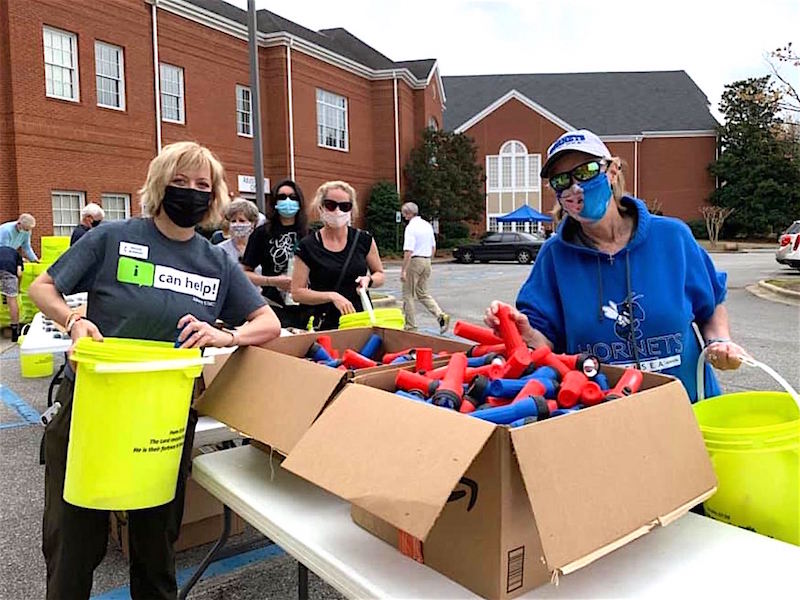 Volunteers help load tornado buckets to take to those in need following the devastating March 25 tornadoes in Shelby County. (Contributed)

Asbury United Methodist Church is located just off Alabama 119 and U.S. 280 in north Shelby County and was at the center of the hardest hit areas. Asbury is less than a mile from the Eagle Point neighborhood, which was severely damaged by an EF3 tornado last week according to the National Weather Service.

The storm damaged or destroyed homes in Eagle Point, but no fatalities were reported.

Following the storms, Asbury has transformed into a donation and pickup center according to the church’s communications director, Amy Gonzalez. The church is also currently providing disaster relief for several areas in Shelby County.

“This storm could have very well taken our roof off and damaged our building. We were grateful that we were able to weather the storm, literally, and help our community because these are our church members and these are our friends. This is our family,” Gonzalez said.

She said since springtime is often tornado season in Alabama, the church had been anticipating severe storms and had been collecting supplies in preparation for the worst. The church had planned to assemble supply buckets in April, but immediately began sending supplies to tornado-ravaged communities in Shelby County right after the tornadoes hit.

“We happened to have these supplies here. We happened to have hammers, nails, tarps, garbage bags and gloves and all the things that people need after a disaster,” she said. “We quickly emailed our congregation and used social media to get the word out that we were going to assemble these 360 buckets sooner rather than later.”

Gonzalez said the church received an overwhelming response from the community. In less than six hours, enough volunteers had arrived to assemble all 360 buckets as well as deliver supplies.

“We had crews lined up to take them out to the community. We loaded up trucks and just told them to go to all the places that had been hit the hardest and to help them in any way they could,” she said.

By the next day, Asbury church members had delivered supplies throughout Shelby County, including Eagle Point, Heardmont Park and Columbiana. At this point, Gonzalez said their priority is getting supplies to tornado victims.

“If people also want to come here and pick it up, we have a place set up so they can come and shop,” Gonzalez said. “There is no limit on what they get. Whatever they need, we have supplies for them to take.”

Asbury is still accepting donations and is requesting food, totalities as well as building and cleaning supplies. In partnership with Grace Klein Ministries, the church delivered food to more 900 impacted families this week.

Gonzalez said the church is also focused on long-term recovery efforts, and has partnered with the Greystone YMCA to create temporary classrooms and e-learning spaces for Oak Mountain students. Both Oak Mountain Elementary and Middle schools were closed indefinitely last week due to tornado damage according to a statement released by the schools.

The elementary school, however, reopened to students on Monday, April 5, while the middle school is closed indefinitely.

In addition to delivering supplies, Asbury United Methodist Church has created a fund to help tornado survivors. The funds will help families impacted by the storm as well as rebulbing efforts throughout Shelby County. So far, Gonzalez said the church has raised more than $20,000.

If you’d like to help with the fundraising efforts, you can visit Pushpay.com/g/asburyonline?fnd=5t5t544yqD4DRC0plZgKRQ&fndv=lock&r=no.