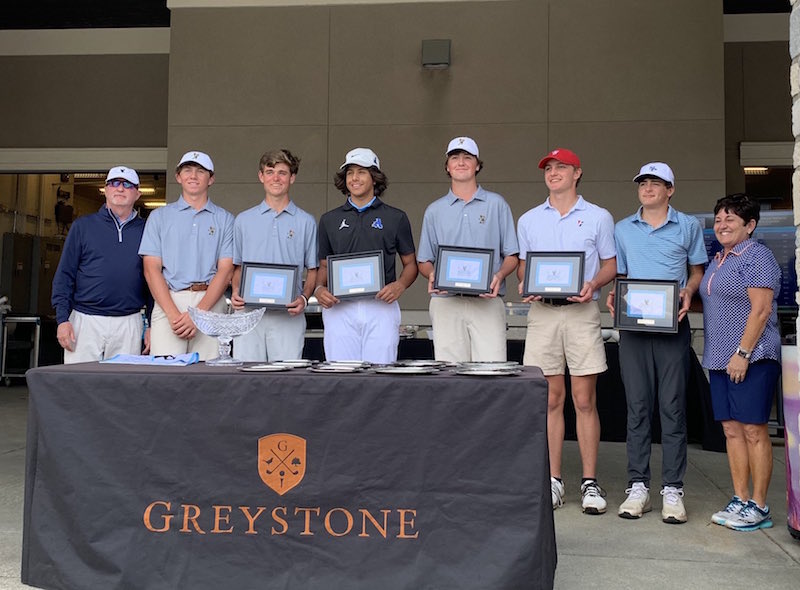 Chase Kyes, second from right, finished second at the Bradley Johnson Memorial for his third second-place finish this season. (Contributed)

HOOVER – Chase Kyes continued a strong season as one of the state’s best golfers at the Bradley Johnson Memorial Golf Tournament March 29-30.

Competing for the Spain Park Jaguars, Kyes is still an eighth grader at Berry Middle School but has quickly made himself known as one of the state’s top golfers at a young age.

At the Bradley Johnson Memorial, Kyes picked up his third second place finish this season in four tournaments with his other finish being a victory.

The eighth grader went toe-to-toe with arguably the state’s best golfer in Mountain Brook’s Gordon Sargent, which has become a common theme throughout the season.

The senior for the Spartans has edged out Kyes in each of his second place finishes as one of the top junior golfers in the country.

But Kyes has been right on his heels, finishing second at the David Miller Invitational, Joe King Memorial and Bradley Johnson Memorial.

In the Bradley, Kyes shot an opening round 73 to start the two-day event 1-over par and two shots off the lead of Sargent, who posted a 1-under 71.

Kyes did improve his scoring by two shots on day two with an Even-par round of 72, but Sargent also improved by two shots, which led to a closing round of 3-under 69.

Sargent finished the tournament 4-under, while Kyes finished in a tie for second with Ward Harris of Vestavia Hills at 1-over par.

The tournament, which honors Bradley Johnson who was a top junior golfer when he tragically died in a car accident, is played annually at Greystone Golf and Country Club to honor Johnson.

Mountain Brook won the tournament with a score of 8-over, while Spain Park finished ninth with a team total of 70-over par.

This year’s tournament continued to share Bradley’s story and the impact of junior golf, while also creating an exciting field of junior golfers.