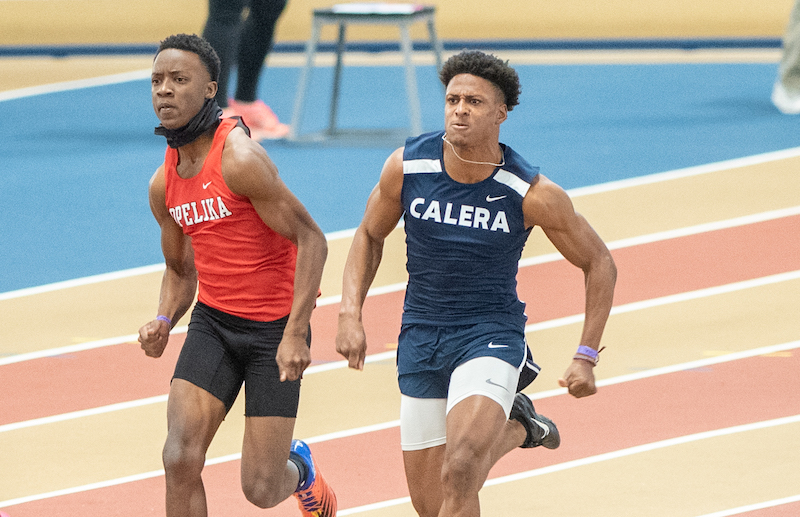 HOOVER – In the second half of the spring sports schedule, local athletes are looking to peak at the right time as they gear up for postseason runs, and several track and field athletes proved they are in midseason form at the Spain Park Classic on Friday, April 2.

Nine of those 11 were from individual athletes, while two came from team relay finishes.

In addition to that, 13 others finishes second or third to grab podium finishes, while two other relay teams finished on the podium as well.

The host Spain Park Jaguars had the most first place finishes at seven with Keon Buck and Mackenzie Culpepper accounting for four of those seven with two apiece.

Keith Warner took home the top spot in the 3,200-meter run thanks to a time of 9:44.70, while Anna Collins claimed first in pole vaulting after clearing a height of 12 feet.

The only individual podium finisher for the Jaguars included John Landers, who claimed third in the pole vault event after clearing a height of 12 feet, 6 inches.

The only other podium finish for the Jaguars came in the boys 4X100-meter relay race where they finished second in a photo finish against Vestavia Hills.

The Thompson Warriors ended the meet with one first-place finisher, while also adding five other podium finishers.

Blake Ellis had a strong day for the Warriors with one win and a finish of third. He took home first in pole vaulting thanks to clearing a height of 14 feet, while teammate Gavin Horton finished just behind in second with a height of 13 feet, 6 inches.

Ellis also finished third in the javelin throw with a distance of 145 feet, 4 inches.

In addition to Horton’s second-place finish, Parker Mitchell also finished runner-up in the discus finals with a distance of 129 feet 4.5 inches.

Jacob Cofield and Eli Sutton joined Ellis with third place finishes for Thompson as well. Cofield finished the 800-meter run with a time of 2:02.36 to earn a spot on the podium, while Sutton finished third in the triple jump with a distance of 43 feet, 3 inches.

The Oak Mountain Eagles also put together a strong event with one individual winner, one relay team winner and three other podium finishes.

The 4X400-meter relay team also claimed the top spot thanks to a time of 3:32.78, which narrowly edged out Vestavia Hills by 0.06 seconds.

Ethan Hammett was Oak Mountain’s only runner to finish second thanks to claiming the spot in the high jump by clearing a height of 6 feet, which missed out on the title by 2 inches.

Chelsea didn’t have any podium finishers at the Spain Park Classic, but did have strong performances at the Challenge of Champions in Mobile. 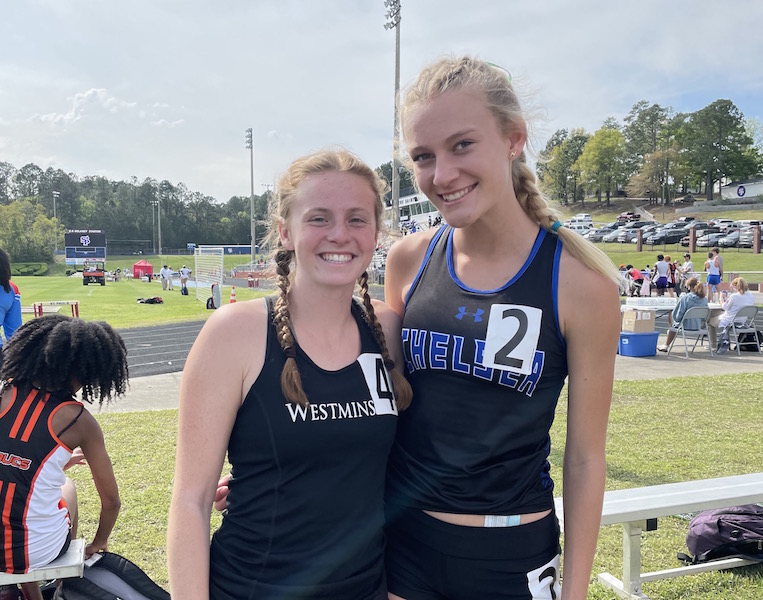 Hallie Porterfield, left, and Cady McPhail both finished on the podium at the Mobile Challenge of Champions on Saturday, April 3. (Contributed/Dale Carrell)

Helena was in a similar situation, but had highlights in both meets.

In the Spain Park Classic, Brooklynn Kirksey and Damian Hines were highlights with Kirksey winning the 200-meter dash thanks to a time of 26.43 and Hines finishing third in the long jump with a distance of 21 feet, 3.75 inches.

Calera also had promising performances in both with Jordon Bray finishing third in the 400-meter dash at the Challenge of Champions. She finished the race in 57.59 seconds, just three seconds out of first.

The boys’ 4X100-meter relay team also finished on the podium after claiming third with a time of 43.43 seconds.