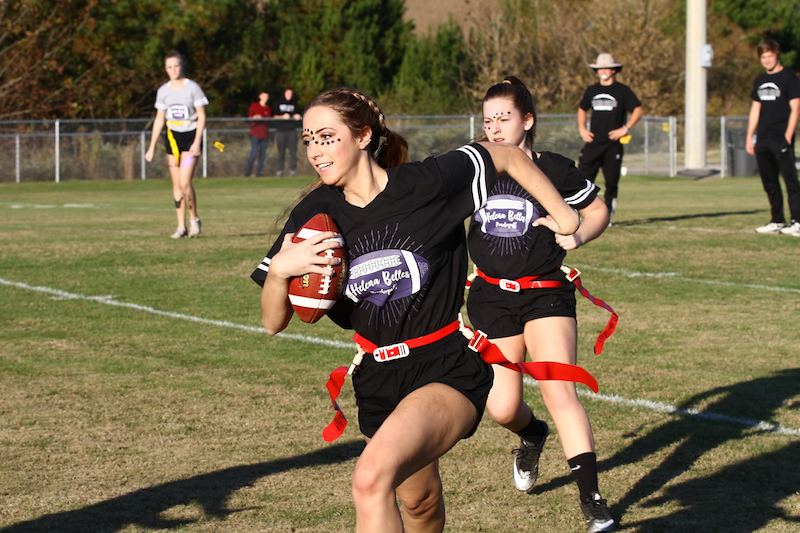 Flag football will be an official sanctioned sport by the AHSAA starting with fall of this year. (File)

MONTGOMERY – In partnership with the Atlanta Falcons and NFL FLAG, the Alabama High School Athletic Association (AHSAA) announced Tuesday, April 6 at its 13th Annual Principals and Athletic Directors Conference that girls flag football will be a sanctioned sport in 2021.  The new sport will be available for member schools starting with fall of the 2021-2022 school year.

The AHSAA Central Board of Control approved sanctioning the sport at its January 2021 meeting, giving the AHSAA the nod to pursue the partnership. The season will culminate in December with a championship game at the 2021 Super 7 State High School Football Championships in Birmingham.

“After discussions with the Atlanta Falcons for several months, we are excited to be adding this girls sport for our membership. We think it will grow rapidly,” said AHSAA Associate Executive Director Alvin Briggs, who oversees the sport of football for the AHSAA. “The AHSAA appreciates the support, commitment and funding being provided by the Atlanta Falcons, the Arthur M. Blank Family Foundation and NFL FLAG.”

In addition to the Atlanta Falcons and the Blank Family Foundation monetary support, NIKE will provide girls flag apparel to assist the AHSAA with launching girls flag football throughout the state.

The Atlanta Falcons have played a key role in the growth of girls flag football nationally. In response to the alarming low number of girls sports offered in Georgia in 2018, the Falcons and the Blank Family Foundation approached Gwinnett County Public Schools, the largest county in Georgia, to pilot and fully fund a girls high school flag football program. As a result, hundreds of girls tried out in the first year bringing the attention of other schools to the program in 2019. Last fall, Georgia became one of only four states (Alaska, Nevada and Florida) to make girls high school flag football an official sanctioned sport.

Following the success of the 2020 season, the Falcons participated in discussions with additional states, beginning with Alabama, to help fund high school girls flag football. Many other NFL teams have also started conversations in their markets to begin girls flag football, using the Atlanta Falcons model as a best practice.

“We are thrilled to see girls flag football continue to expand outside of Georgia. The goal has always been to grow the game,” said Atlanta Falcons President and CEO Rich McKay. “The need and desire for more girls programming is there, and we are really excited the Alabama High School Athletic Association has agreed to add the sport and can now give young women more opportunities to play sports in high school. We look forward to seeing how far and wide we can expand the game of girls flag football together.”

NFL FLAG has been leading the charge to help expand women’s flag football across the U.S. at the youth, high school, and collegiate levels. NFL FLAG will work as a strategic partner with the Falcons, AHSAA and Nike to lead coaching clinics, develop competition guidelines, and establish a framework for high schools interested in instituting girls flag football in Alabama.

“NFL FLAG is proud to be a part of this unique partnership, and we look forward to working with other NFL clubs across the country to help bring girls high school flag football to every state,” said NFL FLAG Executive Director Izell Reese, a native Alabamian who attended Northview High School of Dothan. “I am especially proud to help bring girls flag football to my home state of Alabama.  I’m grateful to be in a position that creates more opportunities for youth athletes to participate in football.”

AHSAA member high schools will have the opportunity to declare girls flag football as a sport for their schools for the upcoming 2021-22 school year.  For more information, please contact an AHSAA at 334-263-6994 or email Abriggs@ahsaa.com.