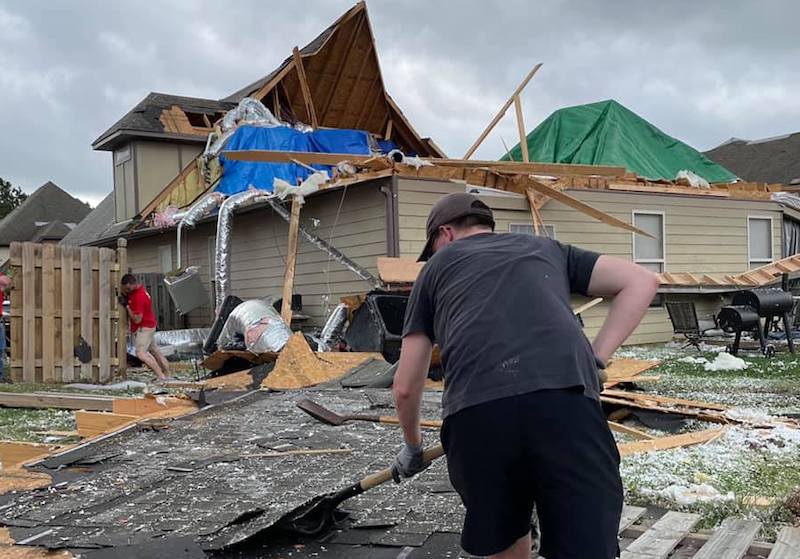 Neighbors come together to clean up debris in the Timberline neighborhood following an EF3 tornado on March 25. (Reporter photo/Hailey Dolbare)

There is an old quote that says “It only takes a second …” and for many residents across Shelby County that quote resonates even more so after two tornadoes tore through our county last week.

As the first storm began to form in Bibb County, our staff realized it was heading straight toward the Pelham, Helena, Indian Springs area and that if it was as bad as the television meteorologists were saying it was, we could be facing devastation.

My family lives in the Timberline community in south Calera and with the storm passing north of us, I packed up my computer and belongings and headed home, where my son and husband were, thanks to Spring Break.

We spent the afternoon checking on coworkers, friends and family around Helena, Pelham and north Shelby County—all who were OK physically, but did have damage to their homes.

Our Shelby County Reporter staff began sending photos of the damage, and to say it was horrific was an understatement.

As the afternoon went on, we continued to watch the weather. That’s when another tornado formed in Hale County. As it passed through Perry and then Bibb County, I looked over at my husband and said, “If this thing stays together, it is headed straight toward us.”

When we saw the tornado was coming through Centerville and wasn’t losing steam, we headed to our safe place—our guest bathroom tub. We sat there, just as we have done so many times before, waiting for the word that the threat was over.

This time, however, it didn’t end the same way.

As we sat huddled in the tub, holding onto each other, all our family could do at that moment, in those few seconds, was just wait and pray. We listened as a freight train went right over our heads. We felt the walls shaking around us and the pressure in the air change dramatically. We heard things bouncing against the sides of the roof and the house.

And just as quickly as it came, it ended. When you hear stories from people who have gone through a tornado, they say it is only a few seconds, but those seconds seem to last for minutes.

We walked out our front door to find our 15-year-old tree laying across our yard and driveway—somehow missing my husband’s car and not falling into our home. We immediately began going house to house, checking on neighbors and thankfully everyone was accounted for and had no injuries. Our neighbor four houses down lost the back half of their roof and house, but thankfully had no injuries.

Within minutes, the Calera police and fire departments were in our neighborhood, checking on our neighbors and ensuring that everyone was safe. Friends showed up to help cut up our tree. Tears were shed, hugs were given and faith was restored in humanity.

Over the next few days, the outpouring of love from the community was overwhelming to say the least. From the north end to the south end of the county, neighbors were out helping cut down trees, picking up debris, dropping off donations, taking others a hot meal or just calling to check on their friends and family.

There is still much cleanup and work to be done around our area. Houses can be rebuilt, items can be replaced, but I know I speak from experience that the love, generosity and friendships that were made can’t ever be replaced—and that is just another reason why Shelby County is one of the greatest places to live.

First responders, neighbors do their part