For the past 15 years, Carolyn Cochran has been a member of First Baptist Church of Alabaster’s Joyful Stitchers (J.S.) sewing club.

Members of the club range in age from their 50s to 93 years old. The fellowship with members inevitably leads to friendship as the members spend time sewing together, Cochran explained. 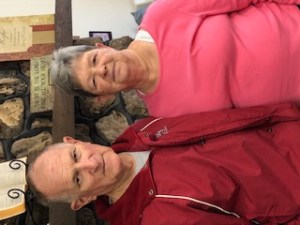 “We are like sisters,” Cochran said. “We don’t sell anything we make.”

Items crafted by club members are donated to nursing homes, women’s shelters, cancer and rehabilitation centers and hospitals. Among the items donated are stuffed animals, which are distributed to Alabaster, Pelham and Helena fire and police departments. Over the years, thousands of items have been donated to charities throughout the community.

J.S. even designed pillow dresses, which were sent to help people in Africa. Stuffed animals were made and also got to travel to Africa with the missions group where the toys were distributed to children.

All of the equipment and supplies have been donated. Cochran owns several sewing machines.

“God has blessed me to afford the machines,” said Cochran, who was the recent recipient of a quilting sewing machine she won in the RSVP giveaway.

Karen became involved in RSVP in August 2020 when another club member became ill and was unable to complete her sewing assignment and asked Cochran to take over for her. Cochran was a volunteer with Quilts 4 Kids for three years and Quilts of Valor for three years. Quilts of Valor is a national program provides quilts for veterans. She was also a member of the Birmingham Quilting Guild for 10 years.

Although retired for the past 18 years, Cochran is always working using her sewing, quilting, knitting and crochet skills to change the lives of those in need in the community. To date she has sewn over a staggering 1,200 masks. When she is not spending time at one of her sewing machines, the 68-year-old is enjoying her time with her spouse, John, a 33-year veteran of the Alabaster Fire Department where he was fire chief; and their dog, Baylee, a 5-year-old rat terrier.

She has been married to John for 39 years. They are the proud parents of five children, four grandchildren and two great grandchildren. Following her life-long desire to be a nurse, she earned a B.S. in nursing from St. Francis University in 1993 and was employed at Shelby Baptist Medical Center from 1987 until retirement in 2003.

Enjoy a day full of art on April 24