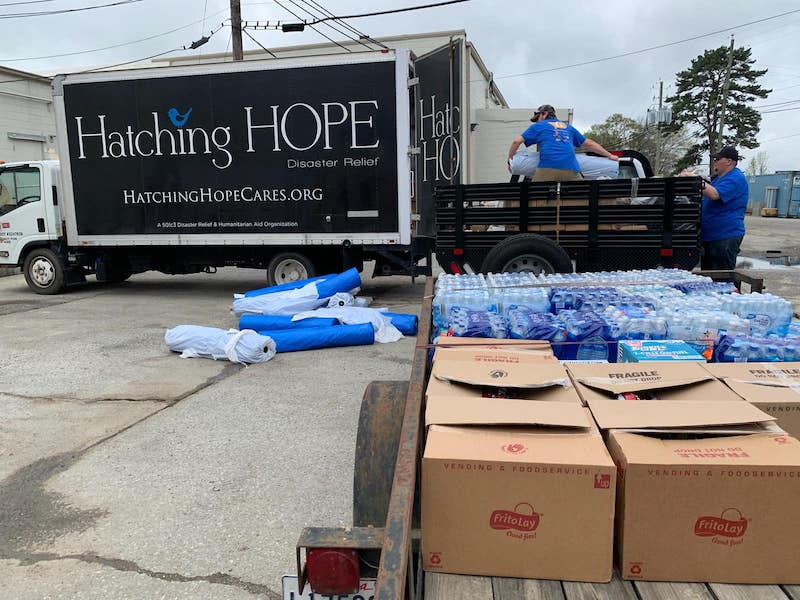 Hatching Hope, a disaster relief organization, has been assisting in disaster relief efforts following tornadoes that ripped through several cities throughout the state during the last two weeks of the month.

According to Hatching Hope’s Jessica Siniard, there was an immediate need in the wake of the storms that they sought to address when the storms happened.

“When everything first happened, we were actually here in our store right in front of the Crosscreek neighborhood, which was pretty terrifying,” Siniard said. “This really hit close to home, so we started putting together our list of most requested items and set up a donation drive to get people to bring them in.”

The organization asked for items like tarps, nails, trash bags, adult diapers, hand sanitizer, energy bars, baby wipes, reusable totes and cleaning supplies that are most needed in the wake of disasters.

“From there we just connected with other organizations that help to get the supplies to the right people in the affected areas,” Siniard explained.

One of the organizations that Hatching Hope partnered with was the Cajun Navy, a volunteer group that assists in disaster relief.

“They came in and donated a ton of supplies to the Pelham and Brierfield communities,” Siniard said. “They brought things like huge tarps, and tons of cases of water for first responders to assist in the initial cleanup.”

Hatching Hope also partnered with Shelby County High School to serve as a distribution center, where many of the students at the school helped to unload more than 20,000 pounds of relief items.

These students ended up delivering more than 20,000 pounds of relief items into their school, which served as a distribution center for the community.

As the initial cleanups ended, Siniard said that their focus switched to the evolving nature of the recovery process. Now that a lot of the fallen trees have been moved, and the damage has been assessed, families have to deal with what happens next.

“We like to work on long-term recovery by collecting things that people will need through the process,” she said. “For example, we are working with a family out of Brierfield who have children. We are collecting things like clothing, school supplies and everyday household needs.”

She explained that there is an initial heavy focus on the cleanup efforts, but often times there is greater damage that families deal with for years down the road.

“The need is always evolving for the different phases of recovery. People are still getting everything cleaned up now and they need a place to stay or they need to rebuild with new furniture and clothing,” Siniard explained. “We stay in touch with those families, and they reach back out to use to let us know what they need.”

As a resident of Pelham, Siniard said that she felt a strong sense of duty to help take care of those affected by these storms.

In the wake of the disaster, Siniard said that one of the best ways that people could help to support Hatching Hope’s efforts would be through monetary donations.

More information about their efforts and how to support them can be found on the Hatching Hope and Marketplace by Hatching Hope Facebook pages.