Reinsch has remarkable night in Chelsea’s upset of No. 1 Homewood 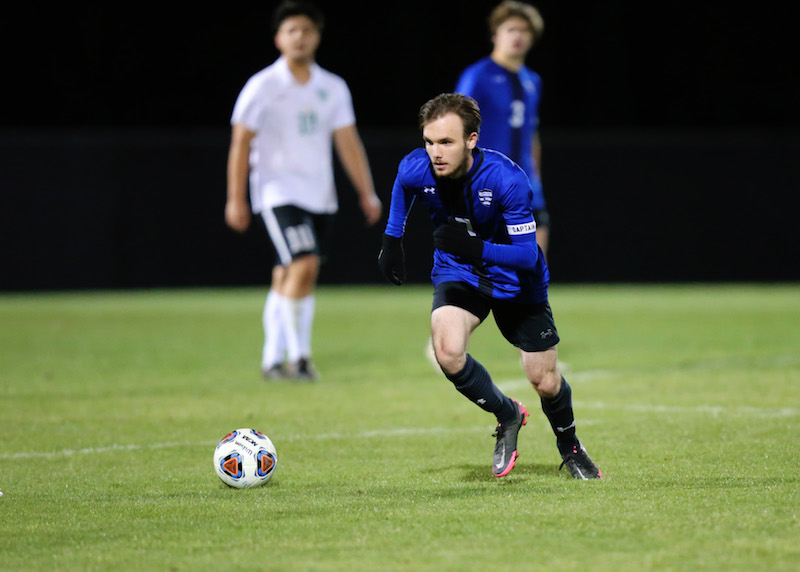 Chelsea senior Matt Reinsch had all three of his team’s goals in regulation and then the game-winning penalty kick in PKs to lead the Hornets to an upset of No. 1 Homewood on April 6. (For the Reporter/Cari Dean)

CHELSEA – For the Chelsea Hornets and senior Matt Reinsch, it didn’t matter that they had been eliminated from postseason contention in their most recent outing when they squared off against Homewood on Tuesday, April 6.

Playing in front of the home crowd, all they cared about was taking down rival and top-ranked Homewood.

It was something Reinsch was determined to do in his last game against the Patriots, and his determination became the difference.

The senior not only scored three goals in regulation, but went on to score the game-winning penalty kick in PKs to help the Hornets pull off the upset victory for their first area win of the season.

His night started fast and he never let up.

In the first five minutes of the game, on Chelsea’s first shot, Reinsch buried one in the back of the net for a quick 1-0 lead.

The two teams then traded missed opportunities with Homewood missing a one-on-one opportunity with the keeper before a great save from the Patriots’ keeper on the other end kept Reinsch from getting a second goal in the first 30 minutes of the matchup.

It would have been a big goal for the Hornets, who were forced to play down a man shortly after due to a red card with 4:47 left in the first half.

Chelsea still took the 1-0 lead into the break, but had to come out in the second half with only 10 players on the field instead of 11.

And for a while, the team answered the call.

The defense was on top of its game early in the second half, while Reinsch added his second goal of the matchup 12 minutes into the half thanks to a great assist from Grant Saehter, which allowed Chelsea to extend the lead to 2-0.

Homewood responded with its first goal of the game with 22:48 to play in the game, but Reinsch answered right back.

Two minutes after the Patriots drew to within one, Chelsea earned a penalty kick, which set up Reinsch for another opportunity. He capitalized once again to pick up a hat trick and put the Hornets back in front by two at 3-1 with 20 minutes left.

But that’s when playing down a man started to catch up with Chelsea.

The exhaustion of keeping pace with the No. 1 team proved to be a challenge, which led to the Patriots scoring two goals in the final 10 minutes to even the score and force overtime.

Chelsea, however, dug deep in the extra time and didn’t allow a goal in the first or second overtime, which led to PKs to determine the winner in the area matchup.

Homewood went first and a huge save gave Chelsea the advantage right off the bat.

The Hornets went on to get goals from Chris Nettuno, Alex Trout, Davis Parker and Kaleb Bass to go a perfect 4-4 and set the stage for Reinsch to have an opportunity at the win.

In a memorable moment for the senior, he stepped up and added his fourth goal of the night to cement the PK win over the No. 1 team.