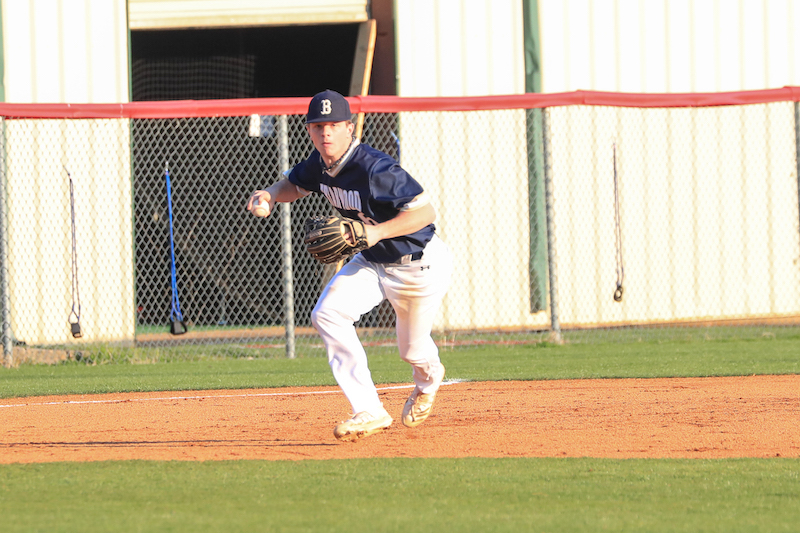 Briarwood picked up an 8-4 win against Mountain Brook on April 6 thanks to a big night from Eli Steadman. (For the Reporter/Dawn Harrison)

MOUNTAIN BROOK – After a 0-2 start to area play and back-to-back one-run losses going into a matchup with Mountain Brook on Tuesday, April 6, the Briarwood Lions were in need of a momentum boost and they got it in the for of Eli Steadman.

Steadman was clutch with runners on base in the game, coming up with two triples that led to five RBIs and help Briarwood pick up their first area win of the season by a final of 8-4.

He went on to finish the game 2-for-4 with one walk and six RBIs in the win, while Briarwood totaled 10 hits in the win.

The Lions needed every one of those hits with the Spartans also totaling 10 hits, but a strong ending to the game from pitcher Jonathan Stevens helped preserve the win.

It was a strong finish to the game for Briarwood, who fell behind early in the game when the Spartans scored three runs in the bottom of the first.

The Lions, however, came right back in the top of the second with three runs of their own to quickly tie the game.

Parker Hutson and Luke Sibley led off the inning with a walk and single, respectively, to put two aboard with no outs. After a strikeout was recorded, Pierce Covin walked to load the bases.

That’s when Steadman started to make his impact on the night felt.

After falling behind in the count 0-2, he battled back to even it at 2-2 before striping a ball to right field that cleared the bases and saw him leg out a triple to tie the game with one swing of the bat.

Mountain Brook regained the lead on an RBI single in the home half of the inning, but Briarwood now had confidence.

In the top of the third, the Lions loaded the bases once again for Steadman. This time, the Spartans were careful in pitching to him, which led to a bases-loaded walk to bring home the tying run.

After a scoreless fourth and fifth inning that saw both teams settle in on the mound and defensively, the difference maker came in the top of the sixth.

The first two batters reached on an error and a single before a passed ball and then another error by the catcher allowed the Brady Waugh to score the go-ahead run.

Sibley then drove home a run with an RBI single to make it 6-4.

Following a strikeout and Covin being hit by a pitch, Steadman stepped to the plate again and put the game to rest with his second bases-clearing triple of the night to create the final score of 8-4.

In addition to Steadman, Sibley finished 3-for-4 and Cal Higdon finished 2-for-5. Wesley Helms, Tyler Waugh and Cameron Ray each added a hit as well.

Andrew Kellum was able to get the Lions through 3 1/3 innings on the mound, allowing eight hits and four runs with two strikeouts.