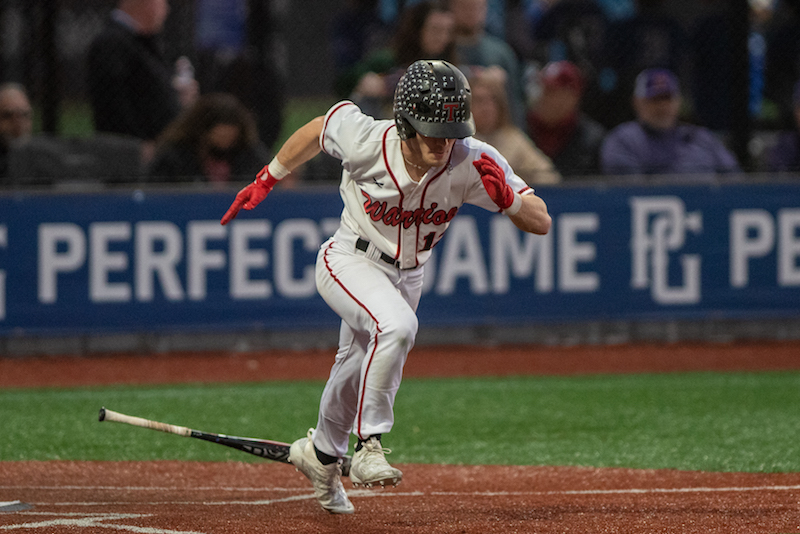 NORTH SHELBY – It hasn’t been an easy spring for the Thompson baseball team, but the difficult schedule for the Warriors paid off on Tuesday, April 6 in their area opener against county foe Oak Mountain on the road.

Thompson got a complete game from Braxton Turnbow on the mound, who struck out nine batters and allowed just two runs, while the offense gave him eight runs of support in a 10-hit night to pick up an 8-2 victory against the Eagles.

In the top of the second, Thompson put up its first four-run inning starting with back-to-back RBI singles from Turnbow and Aaron Shoop. Following a walk, Logan Braunschweig drove home one more with an RBI double, while Cade Watts drove home the final run on a ground out to shortstop.

Oak Mountain’s Andrew Hunt was the only one to respond with two leadoff solo home runs in the third and fifth innings to cut the deficit to two runs.

But after his second homer, the Warriors came back to put the game away with a four-run top of the sixth.

Oak Mountain went on to leave eight runners on base, while Thompson only stranded three.

The Warriors were led by Turnbow at the plate as well with a 3-for-3 performance featuring one RBI. In addition to that, Puckett had two hits, while Braunschweig and Watts each had two RBIs with one hit. Devin Brooks added an RBI, while Gavin Chandler, Shoop and Connor Gregory added one hit apiece.

The Eagles were led by Hunt with a 3-for-4 game featuring two RBIs. Davis Gillespie, Stephen Moraski, Maddox Macrory and Drew Rowland each had one hit.