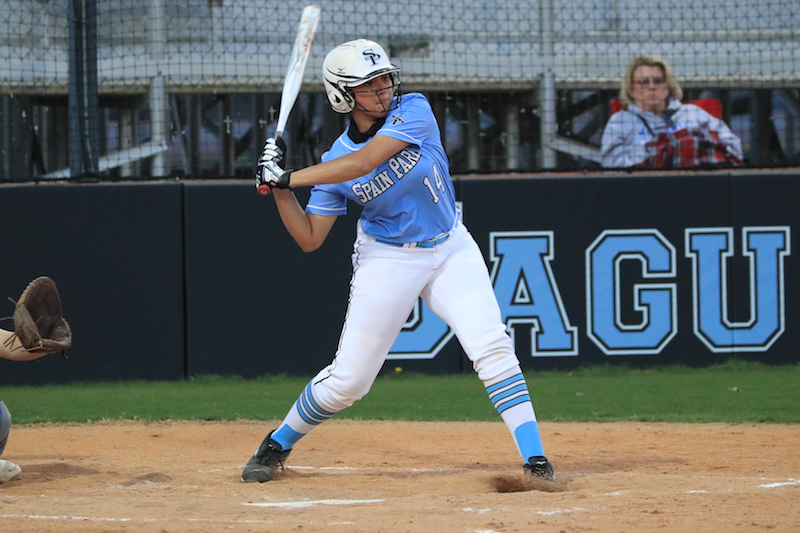 Spain Park’s Maggie Daniel hit a two-run home run in the first inning to help make the difference in an area win against Vestavia Hills. (For the Reporter/Dawn Harrison)

VESTAVIA HILLS – A two-run home run in the opening inning made the difference for the Spain Park Jaguars on Tuesday, April 6 in a 3-1 area victory against Vestavia Hills.

Following a single from Lydia Coleman, the Jags looked like they may strand the lead-off hit with back-to-back ground outs put Vestavia one out from getting out of the inning with no damage done.

But Maggie Daniel stepped to the plate with different thoughts.

She quickly got ahead in a 2-0 count. After watching one strike, she got the pitch she wanted and blasted a ball over the wall in left field for a two-run shot that gave the Jags a 2-0 lead.

More importantly, it gave one of the state’s best pitchers some early run support, and Annabelle Widra capitalized.

She gave up one run in the bottom of the fifth, but that came after the Jags got an insurance run in the top half on a bases-loaded walk from Widra to take a 3-0 lead.

After giving up that one run in the bottom of the fifth on a solo home run, she quickly got a ground out and strikeout to end the inning. From that point forward, the Rebels put one runner on in both the sixth and seventh innings, but couldn’t move the runner any further than first base.

Widra finished the game with 12 strikeouts and allowed just four hits ane one run with no walks in the complete-game victory.

At the plate, Coleman and Emma Jolley both picked up two hits in the win, while Daniel had two RBIs with her home run. Widra also had an RBI with her bases-loaded walk, while Katie Flannery added Spain Park’s fourth hit.