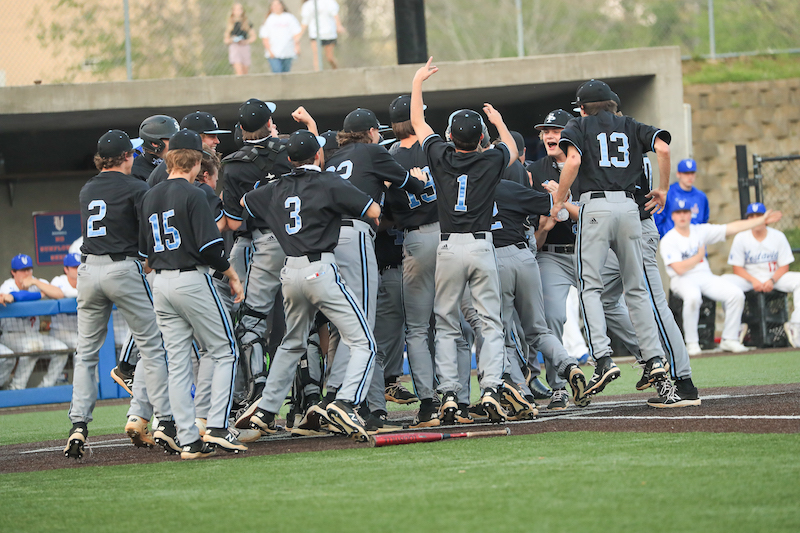 Spain Park overcame a 4-0 deficit against Vestavia Hills to pick up a 6-4 area victory on April 8. (For the Reporter/Dawn Harrison)

HOOVER ­– Trailing 4-0 going to the bottom of the sixth and already in a 0-1 hole in area play, the Spain Park Jaguars were looking for a big momentum boost on Thursday, April 8 in an area matchup with Vestavia Hills.

And that spark came from Josh Harrington, who kicked off a six-run sixth inning with a leadoff double. His hit was followed by five more from the Jaguars, who went on to take a 6-4 lead at the end of the inning before going on to win by the same score.

That helped the Jaguars improve to 18-9 on the season and 1-1 in area play with two area series left this season.

Following the double from Harrington, Conner Eberhardt reached on a single to put two runners aboard before Evan Smallwood doubled to left field to bring both home and cut the deficit to 4-2.

Cole Edwards then added another single, which set the stage for an RBI double from Trent Thompson.

Michael Glick then came through with the game-tying RBI single on a hard ground ball toward second base, before the go-ahead run crossed the plate on an error off the bat of Charlie Goodwin.

That put Spain Park in front 5-4 before an out had even been recorded in the inning.

Then, following the first out, Brooks Ballintine hit a hard ground ball to third base that ended in an error and allowed Glick to come home for the sixth and final run of the inning.

The Rebels had no answer in the top of the seventh as John Robert Thompson got through the inning in six pitches, forcing Vestavia Hills to go down in order, which preserved the comeback win.

At the plate, Spain Park was led by Eberhardt and Edwards with two hits, while Smallwood finished with two RBIs on one hit. Thompson and Glick each added one hit and one RBI, while Ballintine added one RBI and Harrington one hit.

Oak Mountain bounces back with area win against Warriors