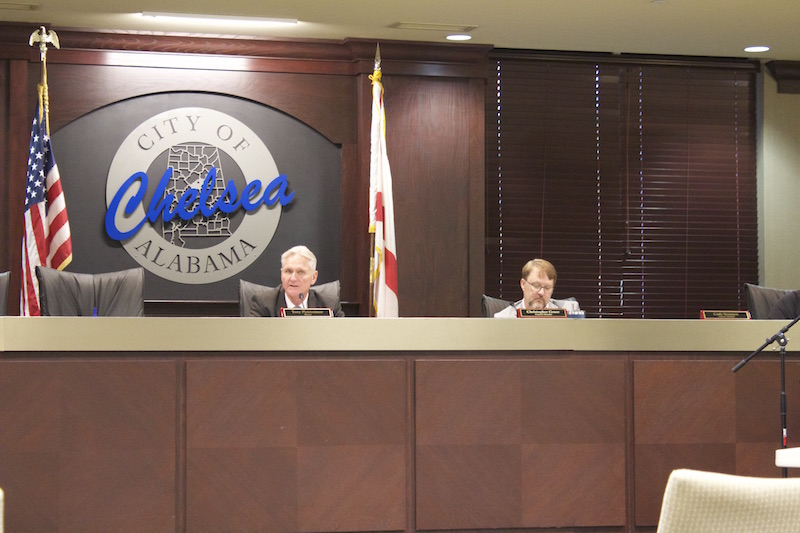 At the most recent city council meeting, Chelsea annexed 46 acres of land, held a public hearing about the new Chelsea Business Park and shared Nick Grant funds with Forest Oaks Elementary School. (For the Reporter/William Marlow)

CHELSEA – The Chelsea City Council held a meeting on Tuesday, April 6, to address everything from education funding to upcoming development projects.

During the meeting, the City Council held a public hearing on whether to rezone Chelsea’s Business Park.  Currently, the park is classified under the city’s agricultural and residential district. The resolution would reclassify the 10.8-acre park, which is located at Foothills Place, as part of Chelsea’s general business district. The City Council passed the resolution unanimously.

In addition to zoning changes, the City Council passed a resolution approving a bid from Powell Builders, a construction company based in Pleasant Grove, for a road and utility project in the park.

“This makes Chelsea officially contiguous with Highland Lakes, which is one of our neighboring communities,” Mayor Tony Picklesimer said during the meeting Tuesday.

The second property that was annexed is located in Sterrett.

Forest Oaks Elementary School principal Stevi Sims said she welcomed the opportunity to partner with the city of Chelsea and have the school become the most recent recipient of the grant.

With the grant, which totals $69,000, Sims said the school was able to purchase 55 ChromeBooks, two MacBook Pros, several iPads as well as interactive panels and whiteboards.

“We thank [Chelsea City Council] very much for the support and their continuing efforts in providing our students with the most engaging and fun learning experience that we could possibly provide them with,” Sims said.