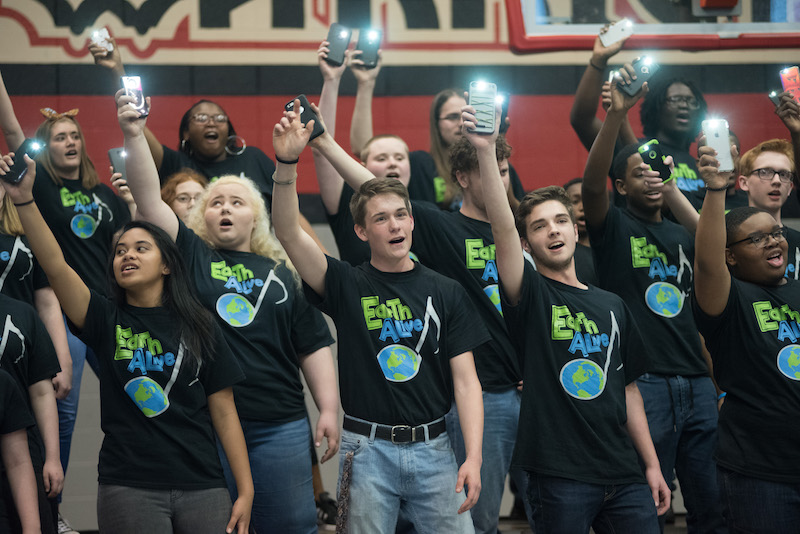 Choral students from THS and TMS will be featured at the fourth Earth Alive concert at Warrior Stadium on April 22. (File)

ALABASTER – Choral students from Alabaster City Schools will be featured at the fourth-annual Earth Alive concert on April 22.

According to TMS Choral Director Dori Hardee, the schools put on this free event every year as a way to showcase the hard work of their students, and give them a setting that makes them feel like rock stars.

“The whole idea behind Earth Alive is that it is like a rock concert for our choirs,” Hardee explained. “It is just a fun laid back atmosphere where our kids can be and feel like rock stars.”

The groups will perform on stages with stacks of speakers in front of a crowd at the stadium, which has the added benefit of being a helpful way to ensure social distancing and safety guidelines.

This event would have been the fifth however due to the ongoing pandemic the school was unable to put it on last year. Hardee explained that being able to offer the concert and showcase the students was very important to her and everyone involved.

“This is an absolutely amazing feeling,” Hardee said. “The closer we get to it, the more everyone is itching to have a live performance. Plus, we can do it in a safe and distanced way. We are just over the moon to be able to do what we do best.”

“When we end we will have a finale where we will set off fireworks with our last song, so that we go out with a bang,” Hardee said.

In addition to the choral performances, Hardee said there would also be 11 local food trucks so that guests could enjoy a snack while they are at the stadium.

“We wanted to up the coolness factor by putting in the trucks, so that people can come relax and listen to our music,” she explained.

Get to know Athlete of the Week JP Fox