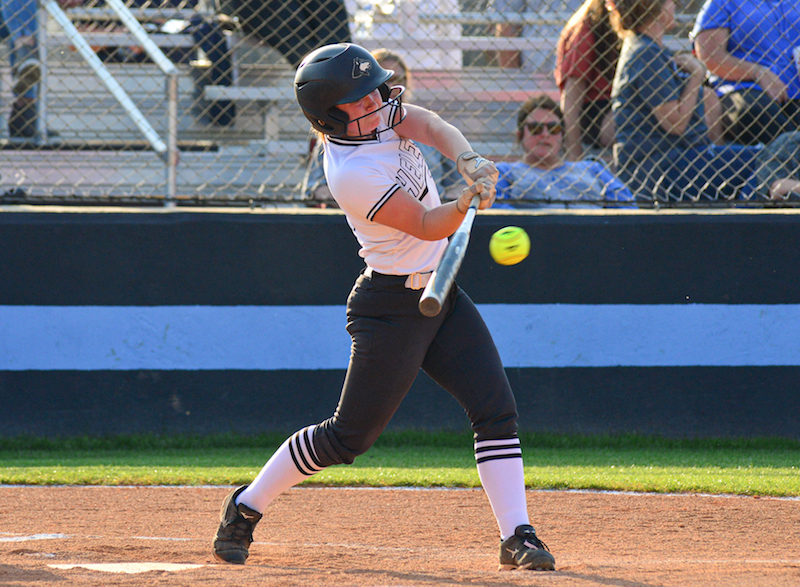 The Helena softball team scored five runs in the second inning to help make the difference in an 8-4 victory against Chelsea. (For the Reporter/Jeremy Raines)

CHELSEA – A 13-strikeout night from Cam Bailey and a five-run second inning made the difference in a four-run win for the Helena Huskies against rival Chelsea on Monday, April 12.

A week after losing 8-4 to the Hornets, the Huskies entered determined for redemption, and despite being outhit 9-8, they took advantage of five Chelsea errors and multiple baserunners to pick up their 29th win of the season.

After a quiet first inning, Helena put together a five-run second to take early control of the rivalry matchup.

An error allowed Lexie Bullock to reach safely before Bailey drove her home with an RBI double. Another error on a hit from Juju Wilkins made it 2-0 before the first out was recorded.

A single from Sarah Ezekiel put another runner on base before Wilkins came around to score after stealing third and advancing home on a passed ball.

Alana Scott then singled to center field to bring home Ezekiel for a 4-0 lead. The final run scored on an error, which allowed Alex Erwin to cross the plate.

Chelsea answered back with one in the bottom of the second with an RBI single from Hanna Marler to cut the deficit to 5-1.

Helena came right back with an additional run in the top of the third on a run from Bullock.

In what was now a back-and-forth battle, Chelsea posted three more in the bottom of the third to make the game interesting and draw within two runs.

The Hornets got a two-run home run from Tyler Erwin and an RBI single from Landry Holt.

The Huskies, however, responded with one run in the fourth and one more in the sixth, while Chelsea ran out of answers the rest of the way.

Bailey got through the bottom of the fourth by striking out the side, while she allowed just five more baserunners the rest of the game.

She allowed nine hits and three earned runs with her 13 strikeouts to pick up the complete-game win.

At the plate, Scott led the way with a 2-for-3 game featuring one RBI and two runs scored, while Bullock added two hits and two runs scored. Bailey finished 1-for-3 with an RBI, while Ann Marie Stanbridge, Dufour and Ezekiel all had one hit.