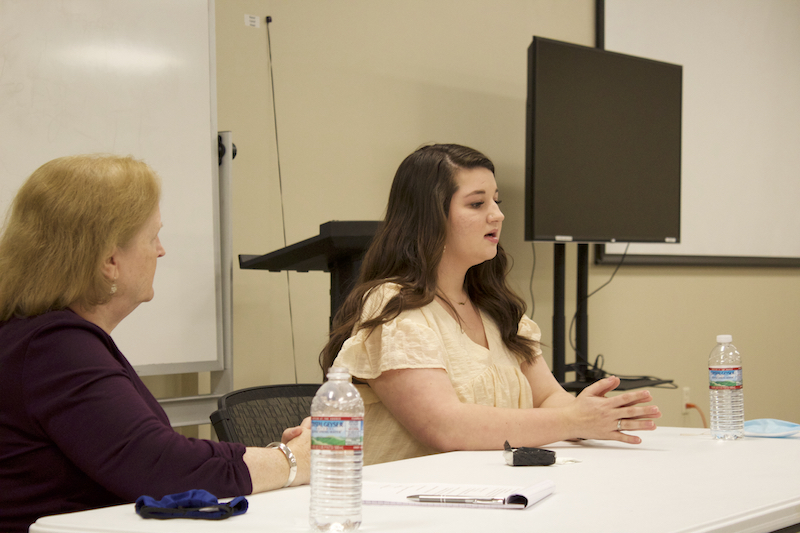 Jessi Kearley speaks at Asbury United Methodist Church to the Court Appointed Special Advocates of Shelby County on April 5 to share her child abuse survival story. (For the Reporter/William Marlow)

Through the CASA program, volunteers are appointed by a judge as a child’s advocate during an abuse case, and are responsible for ensuring a child’s safety. Volunteers often conduct home inspections and visits, and report abuse when it occurs.

During the event, Kearley, 19, discussed the warning signs of child abuse by sharing examples from her own life. Kearley suffered years of abuse and neglect as a child, and then was abused again as a teenager in Alabama’s foster care system.

Kearley shared her experience at a time when child abuse cases are surging across the country. According to Beth Chapman, executive director of Shelby County’s CASA program, there has been an uptick in cases on both the state and national level. She attributes the increase in cases to the COVID-19 pandemic. Due to social distancing and remote learning, Chapman said children are more frequently in contact with an abuser.

“COVID has had a lot to do with it. There has been an increase in the number of abuse cases we have seen across the board in both a state and a national capacity,” she said.

Chapman said 42 volunteers are currently serving 76 children in Shelby County, and that the number of cases is rising.

“Those are pretty high numbers for us right now, and those numbers are climbing every day,” she said. “We just trained 18 new volunteers to help with cases over the next month and half.”

Due to the pandemic, Chapman believes the number of cases may actually be underreported.

“The saddest part is we are probably not getting as many reported cases as there are really out there because children have not been in school this whole time. That’s what is really frightening,” she said.

Kearley said abuse often begins early in a child’s life. Her abuse began at the age of 3 when her parents began molesting her as well as physically abusing her. Her mother suffered from alcoholism and drug addiction, and her father abandoned her when she was 5.

As a result, Kearley was often neglected and frequently lacked basic necessities, including routine meals.

“I would often go to school hungry, and I would ask kids or teachers for food,” Kearley said.

Kearley lived with her mother until the age of 12, during which her estranged father took custody of her. However, she had not seen her father in seven years, and wasn’t sure what to expect.

“I really did not have contact with him at all. He was a stranger to me,” she said.

Kearley spent the next year with her father, who she soon discovered was quite controlling. He wouldn’t let her call or talk to anyone that he hadn’t approved, and she could only call people during set times. One day, she exceeded her allotted call time, and her father became enraged. Kearley tried running away, but did not make it far down her neighborhood street before her father tackled her and then proceeded to hit her. Kearley locked herself in a parked car to escape him.

The police arrived, and questioned both Kearley and her father. Kearley’s father told the police that she had surpassed her phone curfew, and said that she was to blame for the incident. Still being a minor, Kearley said the police believed her father’s version of events, and as a result, she remained in her father’s custody.

However, the abuse only worsened, and Kearley was eventually impregnated by her biological father at the age of 12.

“I wondered why. Why would my supposed dad do that to me?” she questioned.

Kearley began experiencing pregnancy symptoms and visited her school counselor to inform her of the incident. The counselor recommended Kearley take a pregnancy test, which later confirmed that she was in fact pregnant. Following this confirmation, Kearley’s school counselor alerted the police.

As the police investigated her case, Kearley went to the hospital to have a medical examination. Doctors informed her that she was 5 ½ months pregnant, but that they had discovered life-threatening health complications with the pregnancy.

“The doctors chose my life over the baby’s because there were so many health issues,” she said. “I closed my eyes through the whole thing. I just remember being scared. I didn’t know what was going to happen.”

“I thought it was my fault. A child my age should have never had to go through that at all,” Kearley said. “That never should have happened.”

A DNA test later confirmed that Kearley’s biological father had in fact impregnated her. He was arrested and ultimately convicted of first-degree rape and incest. Her biological father was sentenced to 25 years in prison, according to Kearley.

As Kearley recovered in the hospital, the lead investigator in her case comforted her. The investigator even stood guard outside her hospital room during her recovery and continued to check up on her after she returned home.

“He told me that he was there to protect me, and he would make sure that nobody would hurt me again,” she said.

Kearley returned to her biological mother’s custody, but her mother continued to be abusive. Kearley, who was still reeling from her trauma, would often confine in her Bible. Her favorite verse was Psalm 99, and she would read it frequently. However, her mother learned of this and ripped the page out in spite she said. Overtime, her mother eventually became violent.

“When I got sent back to her house, it got worse. She actually pinned me to the floor and choked me half to death,” Kearley said.

Following this incident, Kearley was placed in a foster-care home, but said the foster mother was also physically abusive. She was then sent to the Tallapoosa County’s Girl Ranch, where she stayed for six months. At one point, the investigator in her case and his wife visited Kearley at the ranch, and the investigator and his wife soon made it a habit to visit Kearley on the first Saturday of every month.

However, Kearley said she began struggling with depression from the trauma she had endured while living with her parents and attempted suicide.

“I just felt lonely, unwanted and unloved,” she said. 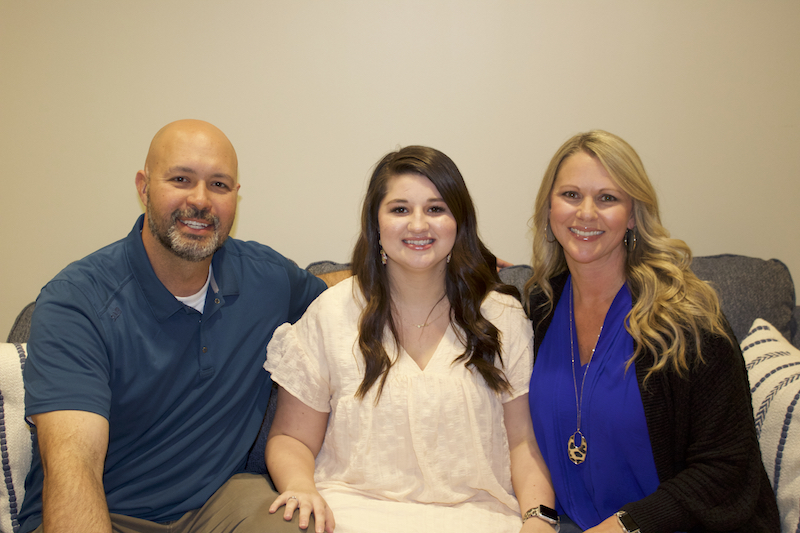 Kearly with her adopted Parents Chris and Amy Kearley. (For the Reporter/William Marlow)

In the wake of her suicide attempt, Kearley said the investigator and his wife, Chris and Amy Kearley, wanted to provide her with a safe and stable home, and requested to adopt her.

However, they were unable to because her biological parents still had custody of her.

The Kearleys and Jessi began lobbying state lawmakers to enact legislation that would terminate the parental rights of anyone convicted of first-degree rape, first-degree sodomy or incest. In 2019, state legislators finally took notice, and the Alabama Legislature passed Act 2019-512, also known as “Jessi’s Law,” which denies the rights of parents to a child they have sexually assaulted.

With passage of this law, Chris and Amy Kearley were able to legally adopt Jessi in 2019. Jessi said she feels relieved with the enactment of this law, but said she will continue to advocate for measures to protect children’s rights.

“I feel free and I feel heard, but I want other children to feel heard like I have,” she said. “I feel like we can do better, which is why I want to make sure there is mandated reporting,” Jessi said.

According to Chapman, before the enactment of Jessi’s Law, Alabama was only one of eight states that did not have a law barring parental rights to anyone convicted of first-degree rape, sodomy or incest.

“Jessi brought Alabama on the map and where it needs to be relating to this issue,” Chapman said. “If we can get these children out of these parents’ possession and out of their homes, we know we are saving lives.”