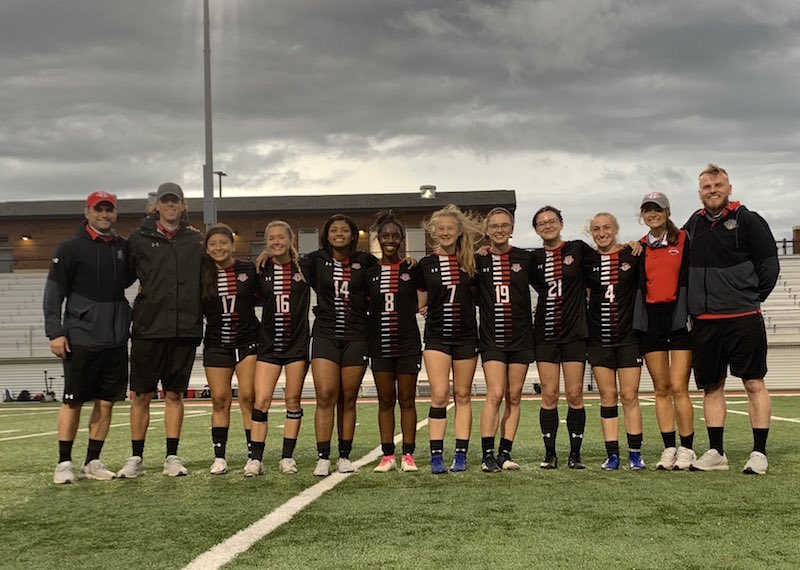 Thompson’s senior class stepped up in a big way on senior night to lift the Warriors to a penalty-kick win against rival Hoover in area play. (Contributed)

ALABASTER – The Thompson Warriors welcomed the Hoover Buccaneers for a big rivalry game on Friday, April 9 looking to keep their playoff hopes alive while also celebrating the seniors on senior night.

The Warriors came out the other side of a physical, hard-fought game with a big win in the penalty kick round breaking a scoreless game through regulation and two overtimes to win 3-1.

The win avenges a 3-0 loss to Hoover back in March, but this was a victory Dan DeMasters and his program had been in search of for some time.

“With it being Senior Night we knew we were going to bring a little extra energy. We’ve been practicing that toughness mentality, that ‘Thompson Tough’ and our girls really brought that out and they finally broke through,” DeMasters said. “We haven’t had a victory against Hoover the last three years so to get this on senior night, in an area game against Hoover, the girls executed when they needed to and it was a good game.”

It didn’t take long for the match to get chippy and it stayed that way throughout.

Several free kicks and big collisions dotted the game’s first half as the two rivals didn’t give an inch in a raucous environment. The Warriors’ defense and their play in goal took center stage and they stepped up in a big way.

Goalkeeper Alexi Stanton had a standout game between the posts as she made big saves in one-on-one situations, including one in her own goalie box.

“In this game she just played lights out and our back line, I can’t say enough about them,” DeMasters said. “We have one junior back there and the rest are seniors, and I knew this year would be special because of those seniors so they’re definitely setting the standard for what we want in the future.”

Hoover came out as the aggressor early, but Thompson became more aggressive and attacking as the game wore on. The Warriors took six shots to Hoover’s three and put half of them on goal before the halftime buzzer sounded.

Chances to score became even more scarce in the second half as the two teams continued to battle going hard after every 50/50 ball knowing one play could tip the scales in a match of this nature.

Hoover got some good looks in the late going putting three of their six shots on goal, but neither defense budged.

Tied 0-0 heading into the overtime periods the game seemed to tighten even more than it already had.

All three of the extra sessions rendered the same result as regulation so it came down to a winner-take-all penalty kick round.

The Warriors turned the tables, however, as Mary-Paige McDonald and Marlee Roach nailed both of their attempts, while Hoover hit the crossbar twice in a row and then sent its fourth over the goal entirely.

Up 2-1 and down to their last player, Thompson senior Marbely Murcia stepped up to close the door for the Warriors.

Murcia stepped to the penalty hash and calmly laid a perfect shot into the left corner of the goal to seal the victory.

Murcia ran to midfield where she was mobbed by her teammates, then a swarm of students who rushed the field.

After the game, McDonald and Murcia spoke about the moment and what it meant to secure the win for a Thompson team that’s been one of the best in recent memory.

“Penalty kicks are always a bit nerve-wracking for me since I never know where I’m going to go with the ball,” McDonald said, still seemingly out of breath. “So when I made it and it was good and I’d realized I’d made it that was a sigh of relief. Then people were cheering and I didn’t realize I’d made it until they started cheering.”

It was an emotional moment for Marbely, who made it clear this win was more about the team than merely the opponent on the other side.

“Just to do it for the girls and do it for the team is everything for us, that’s all we needed,” Murcia said. “We have worked so hard to get to this point and we proved to ourselves that we could do it.”

The Warriors moved to 16-3-2 on the season and currently sit at No. 6 in the Class 7A rankings.

The next game looms large for the team’s postseason hopes as they host Oak Mountain in a big county and region matchup tonight at 5 p.m.

Oak Mountain bounces back with area win against Warriors