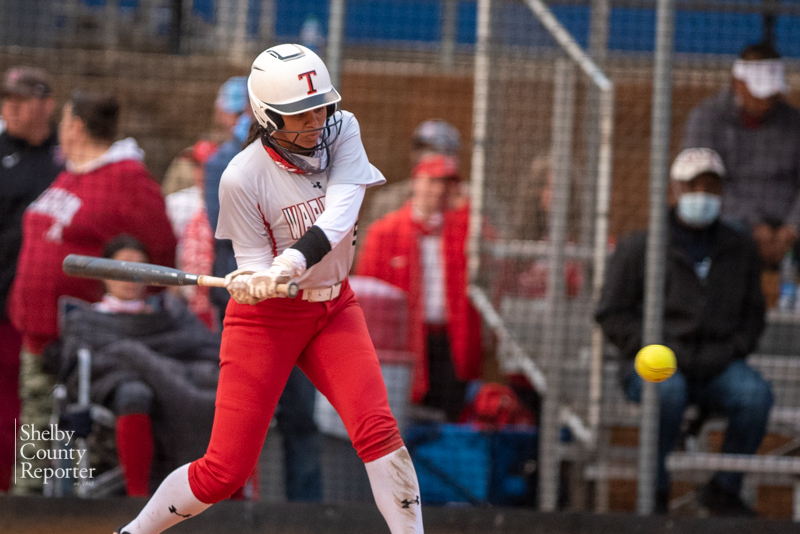 Thompson's softball team became the first in the county to reach 30 wins with a 10-run victory against Gardendale on April 12. (Reporter photo/Keith McCoy)

ALABASTER – The Thompson Warriors overcame a 2-1 deficit in the bottom of the fourth inning against Gardendale on Monday, April 12, thanks to an eight-run inning that propelled them to their 30th win of the season.

The Warriors went on to add three more in the fifth to take down the Rockets 12-2 en route to their 15th win in the last 16 games.

After falling behind 1-0 through one inning and 2-0 in the top of the third, Thompson scored its first run of the matchup in the bottom of the third on an RBI groundout from Dailynn Motes.

Olivia Tindle crossed the plate for the run after great base running that saw her advance to second on a wild pitch and then steal third to become a threat before the grounder brought her home.

Then, after a quick inning in the field, the offense came back to the plate ready to take command.

It started with a double from Jenna Williams, a walk from Laney Williams and a single from Ella Pate to load the bases.

A hit batter and error brought home two runs before the first out was recorded.

But the bases were still loaded, and the Warriors capitalized with three consecutive hits. Lindsey Cook drove home two with a two-RBI double before Motes hit an RBI single and Eleanor DeBlock drove home two more on a double.

DeBlock then scored on an error by the catcher to give Thompson a 9-2 lead through four innings.

The Warriors added three more in the fifth to pick up the run-rule win in five innings. An RBI groundout from Tindle, an error on a hit from Cook and an RBI single from Motes accounted for the runs.

Thompson was led by Motes, who went 2-for-4 with three RBIs, while Pate also added two hits.

DeBlock and Cook both had two RBIs on one hit, while Madison Poplin also added one hit and one RBI. Jenna and Laney Williams each finished with one walk, one hit and one run scored.

Ellie Hamby got the start in the circle and pitched the first 1 1/3 innings allowing one hit and one run. Holly Selman finished the game and allowed one run on two hits with two strikeouts.