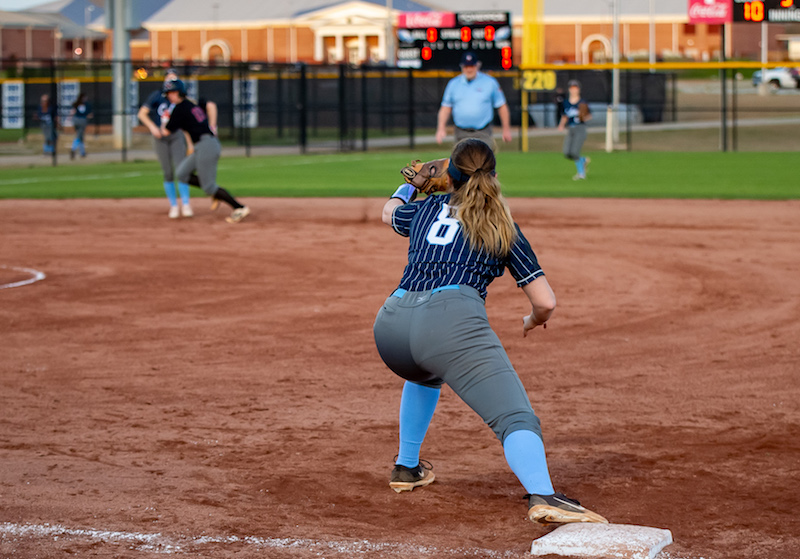 Calera’s Kendall Douglass, above, hit a walk-off RBI single to lead the Calera Eagles to a 13-12 victory against Chilton County on Tuesday, April 14. (For the Reporter/Larry Dancy)

CALERA – In a game that featured a combined 35 hits, the Calera Eagles entered the final inning of their area matchup with Chilton County trailing 12-7.

The Tigers had scored in every inning up to that point, but Calera kept them off the board in the top of the seventh to enter the bottom half needing five runs to tie and six to win.

In a game that saw a little bit of everything, none of it was outmatched the finish from the Eagles, who put together a remarkable comeback.

They started the inning with a single from Kendall Douglass and a double from Kaitie Mitchell.

That set the stage for Payton McDonald, who brought home both baserunners with a single to cut the deficit to three runs at 12-9.

After the first out was recorded, the Eagles wiped away two more runs on a two-run shot to center field from Kate Townley.

Now trailing by one run, Kayla Butler singled up the middle to quickly put the tying run on base. And it didn’t take long for her to reach home.

Three pitches into the next at bat, Keara Hall lined a ball to the gap in center field that caused trouble by not only bringing home Butler, but led to a triple for Hall.

Back-to-back walks then loaded the bases with only one out on the board.  Douglass then stepped back to the plate in a great spot.

She took the first pitch she saw and hit a ground ball toward second base that wasn’t fielded in time to get Hall out at home, leading to the thrilling 13-12 walk-off win.

It capped off a 21-hit night for the Eagles, who scored one in the first, two in the third and four in the fourth.