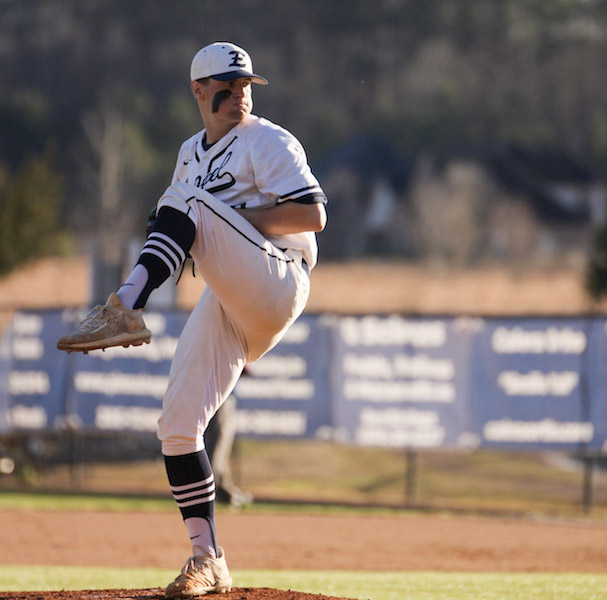 Charlie Yeager, above, continued a strong season on the mound with recent success against Ezekiel Academy and Tuscaloosa Academy. (Contributed)

TUSCALOOSA – The Evangel Lightning picked up their third win in their last four games on Tuesday, April 13, with all three wins coming in big matchups against conference opponent Ezekiel Academy and AISA opponent Tuscaloosa Academy.

Following two losses AISA No. 1 Pike Liberal Arts by finals of 5-3 and 10-0, the Lightning bounced back on April 5 with back-to-back wins against rival Ezekiel by a combined 11-1.

Then, one week later, they took down Tuscaloosa Academy 5-4 to pick up their 18th win of the season by improving to 18-8 on the season.

In the first win against Ezekiel, Charlie Yeager continued what has been a remarkable year with a complete-game shutout featuring 13 strikeouts and one hit given up to lead Evangel to a 2-0 win.

Yeager also had one RBI at the plate in two at bats, while Nathan Owen had the other RBI on one hit. Tyler Gothard, Eli Whitfield and Evan Bourne each added 1-for-2 games at the plate.

In the second game, Owen took to the mound and pitched a complete game himself. He also got the help of an offense that scored nine runs in four innings to finish off the game early for a 9-1 victory.

Owen went all three innings on the mound and allowed three hits and one run with five strikeouts.

Jake Callahan and Whitfield led the way at the plate with both picking up two hits and two RBIs. Will Welch and Owen also both had hits at the plate.

Then, following a 10-inning 4-0 loss to AISA No. 3 Bessemer Academy on Monday, April 12, the Lightning stepped back on the field on April 13 against Tuscaloosa Academy.

Evangel took a 3-0 lead in the top of the third thanks to a three-run homer from Whifield to give the Lightning an advantage.

Yeager again got the start on the mound and gave up one hit in two innings. All six outs he recorded were strikeouts before he exited the game after two innings.

Evan Bourne then finished off the final five innings with five more strikeouts. He gave up eight hits and four runs, two of which were earned, but the Lightning were able to withstand the four runs thanks to two more of their own in the fifth.

Following singles from Yeager and Sam Oddo, Owen drove home Yeager with an RBI single before Oddo scored on a passed ball during the next at bat.