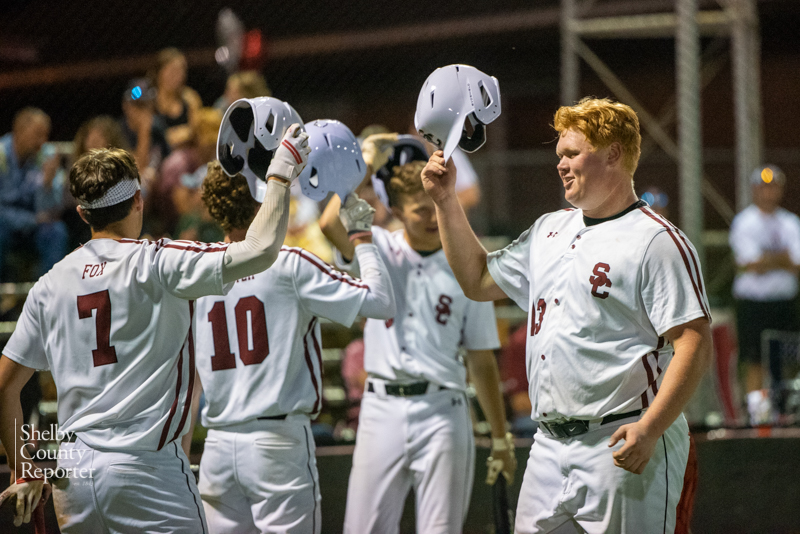 The Shelby County Wildcats took down Talladega on April 13 to win their 10th game in a row and lock up the Class 5A, Area 8 championship. (Reporter photo/Keith McCoy)

COLUMBIANA – It all seems to be clicking for the Shelby County Wildcats right now after they picked up their 10th win in a row on Tuesday, April 13, to claim the Class 5A, Area 8 Championship.

It was a fitting accomplishment for the Wildcats, who get to celebrate the milestone win after last year ended early due to COVID-19 with them set to not only win the area title but compete for the state championship as the No. 1 team in Class 5A.

Now, they’re looking like that team all over again after taking down Sylacauga 10-0 on Tuesday night for not only their 10th consecutive win, but their third in a row by 10 or more after taking down Talladega 26-0 and 19-0 last week.

The Wildcats have scored eight or more runs in nine of the 10 wins and are now 17-7 overall on the season.

J.P. Fox was a key factor in the win against the Aggies thanks to a complete-game win on the mound. He gave up one hit and one walk in the shutout victory, while adding six strikeouts.

He was able to feel comfortable early in the game thanks to the Wildcats getting off to a fast start offensively.

They scored four runs in the opening inning after loading the bases despite no hit through the first three batters.

Following the first out of the inning, Connor Aderhot doubled to left field to bring home two runs, before a Kaden Cardwell sac fly made it 3-0. That was followed by an RBI single form Austin Wilson to extend the lead to four runs through the first frame.

Shelby County added to the lead in the second inning when J.T. Pennington blasted a two-run home run to left field to make it 6-0 through the first two innings.

The Wildcats continued the impressive night in the bottom of the fourth when Fox laced an RBI single to left field before Aderholt added another RBI with a single to center field.

Looking to cap off the run-rule win early, Shelby County loaded the bases again in the bottom of the fifth with no outs for Matthew Pearson. Pearson then hit a hard ground ball up the middle to drive home both Logan Starnes and Riley Lewter to finish off the 10-0 win.

Aderholt finished 2-for-3 with three RBIs to lead the Wildcats, while Wilson and Fox each added two hits and one RBI. Pearson and Pennington both had one hit and picked up two RBIs, while Lewter had one hit and Cardwell one RBI.